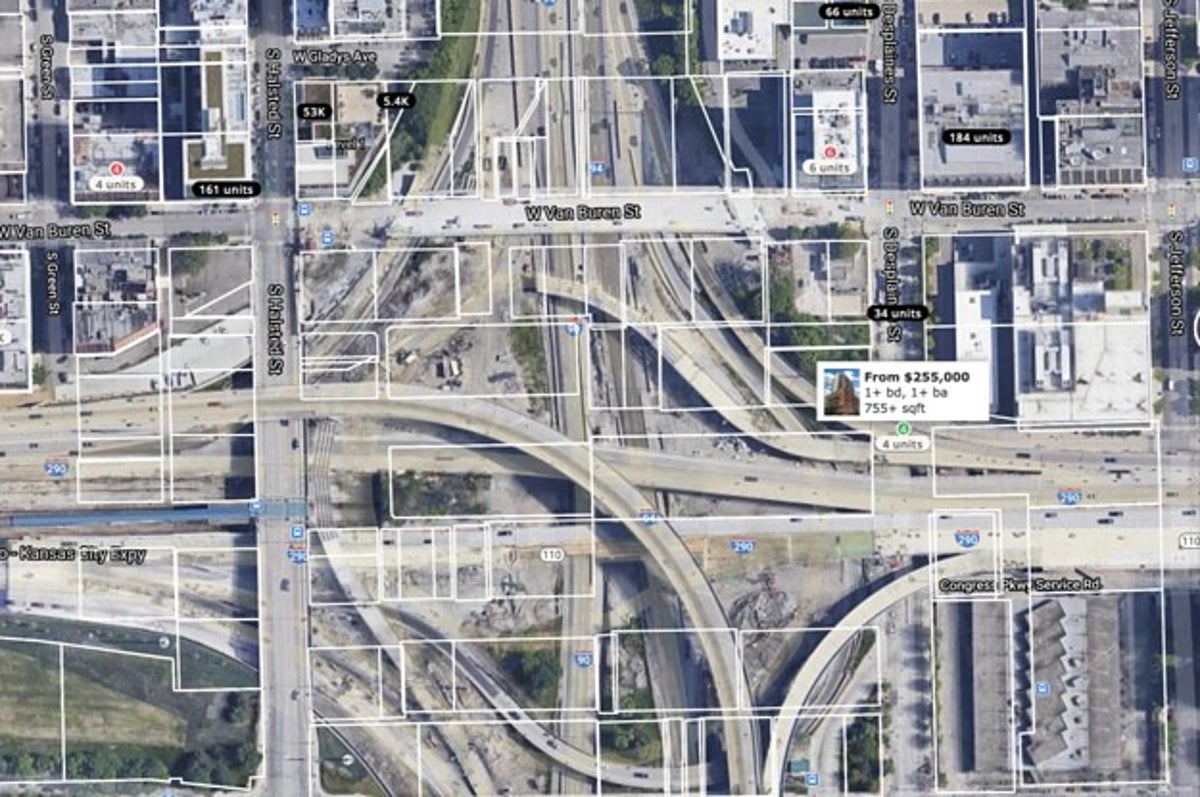 Ghost boxes in Zillow’s maps of cities like Chicago and Cincinnati appear to mark the homes bulldozed to build freeways — and the neighborhoods that were displaced in the process.

Some acts of violence are designed to erase the evidence of their own existence — like in the 20th century, when the US government displaced low-income, often Black neighborhoods by building highways where they stood. But Zillow appears to have unexpectedly made that evidence visible.

Apparently by accident, Zillow, the website that connects people with new homes and rentals, appears to be showing the outlines of these ghost neighborhoods displaced by the creation of highways and interstates.

Zillow told BuzzFeed News after publication that it uses data from multiple sources, and aims to give people to most up-to-date information possible.

“When we identify data that is outdated, we update it as soon as possible,” a Zillow spokesperson said. “This highlights the long history of displacement and the impact of systemically biased land use policy in America of the 20th century, a story we continue to work to tell.”

In a tweet on Wednesday, architect David Cole shared an image of the Jane Byrne Interchange (formerly called the Circle Interchange) in the Greektown neighborhood of Chicago taken from Zillow’s website.

If a person zooms in on the highway, rendering the map in satellite imagery, white boxes will appear where no houses or buildings currently exist. The white boxes appear to mark where houses and buildings previously stood. The fluke is possibly the result of Zillow using outdated neighborhood data rendered obsolete by the creation of the highway, which opened in 1965.

It’s not clear which of Zillow’s map systems is producing the ghost boxes. Zillow gets its real estate data from public records, as well as from “deed transfers, mortgages, foreclosures, auctions, property tax delinquencies.” Its satellite imagery uses Google Maps, which pulls from its own satellites and other parties such as Maxar Technologies, CNES/Airbus, Sanborn, the US Geological Survey, and the USDA Farm Service Agency.

Whatever the source, the map does seem to show houses that don’t exist anymore. A 1940 map of Chicago (posted in the American Geographical Society Library Digital Map Collection) shows buildings that appear to match up with those represented on Zillow. The area used to be home to Greek immigrants.

Cole noted that these boxes may not appear in every city, but he found another example of this occurring in Cincinnati. He told BuzzFeed News that someone in the Original Chicago Facebook group pointed out the white boxes, so he decided to look for them himself.

“I looked up Chicago and Cincinnati specifically because I’ve lived in both cities for a number of years, and each city has a particularly ugly history of freeways being plowed through vulnerable and largely Black neighborhoods,” Cole said.

Other real estate sites, like realtor.com, also show the white boxes over areas like the Jane Bryne Interchange if people zoom in on the area in satellite mode.

The federal government has a long history of intentionally displacing people with low incomes, especially people of color, through the construction of highways. In 1938, the secretary of agriculture told President Roosevelt that if the federal government routed highways and interchanges through cities, they could achieve “the elimination of unsightly and unsanitary districts,” according to Richard Rothstein’s 2017 book, The Color of the Law.

Over the next several decades, “slum clearance” displaced thousands of families, often Black, to build federally funded freeways through their neighborhoods.

This article has been updated to include comment from Zillow.

Twitter And Snapchat Are Reining Trump In. Critics Want Them To Do It Around The World.
Nextdoor Says It Supports Black Lives Matter. But People Say The Platform Is Censoring Their Conversations About Race.