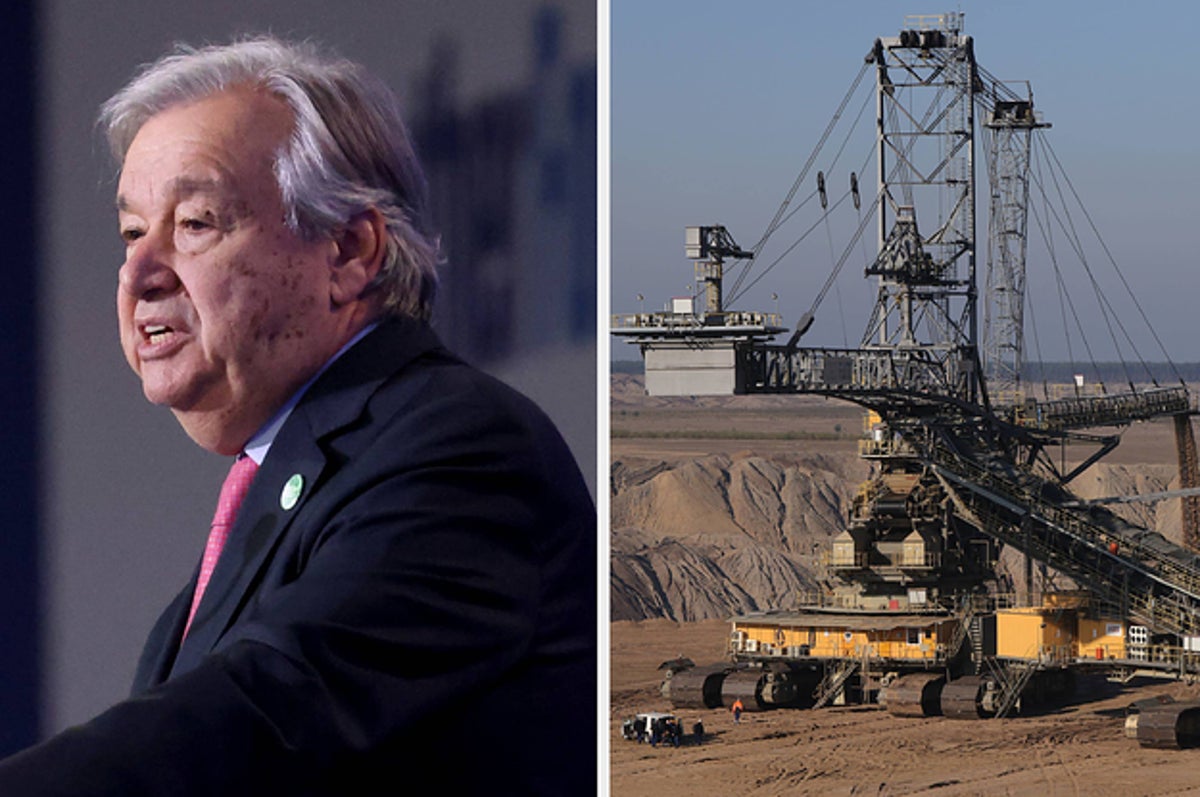 “Our addiction to fossil fuels is pushing humanity to the brink,” António Guterres, secretary-general of the United Nations, warned the climate community gathered Monday in Glasgow for the launch of the 26th UN Climate Change Conference (COP26).

“We face a choice: Either we stop it or it stops us,” Guterres continued. “And it’s time to say enough — enough of brutalizing biodiversity, enough of killing ourselves with carbon, enough of treating nature like a toilet, enough of burning and drilling and mining our way deeper. We are digging our own graves.”

The secretary-general’s fiery speech comes as countries struggle with the climate disasters fueled by the more than 1 degree Celsius (roughly 2 degrees Fahrenheit) of global warming that has already occurred since the late 1880s. This warming, scientists agree, is the direct result of humankind burning fossil fuels and releasing greenhouse gases into the atmosphere.

The Earth is on track to get much hotter, too. Even though practically every country previously agreed to limit future warming to less than a total of 2 degrees Celsius (3.6 degrees Fahrenheit), ideally to 1.5 degrees Celsius (2.7 degrees Fahrenheit), back when they signed the Paris climate agreement in 2016, they are now far off track. Various analyses of current country-level climate policies and pledges to do more in the future show the world is instead on track to warm about 3 degrees Celsius, which would be disastrous.

Guterres underscored this sobering reality in his recent speech, warning world leaders that this international climate summit is their best chance to turn things around and that people’s lives are literally on the line.

“Recent climate action announcements might give the impression we are on track to turn things around. This is an illusion,” Guterres said, later adding, “And even if the recent pledges were clear and credible, and there are serious questions about some of them, we are still careening towards climate catastrophe.”

“Young people know it,” he said. “Every country sees it. Small island developing states, and other vulnerable ones, live it. And for them, failure is not an option. Failure is a death sentence.”

The only way forward, Guterres argued, is to more drastically cut greenhouse gases, to end subsidies for fossil fuels, to phase out coal, and to invest in a low-carbon economy.

“If commitments fall short by the end of this COP,” he said, “countries must revisit their national climate plans and policies not every five years — every year, every moment until 1.5 degrees is assured.”

You Can Make Cocktails With Soup Broth. We're Serious.
A Capitol Riot Trial Is Slowly Starting To Take Shape