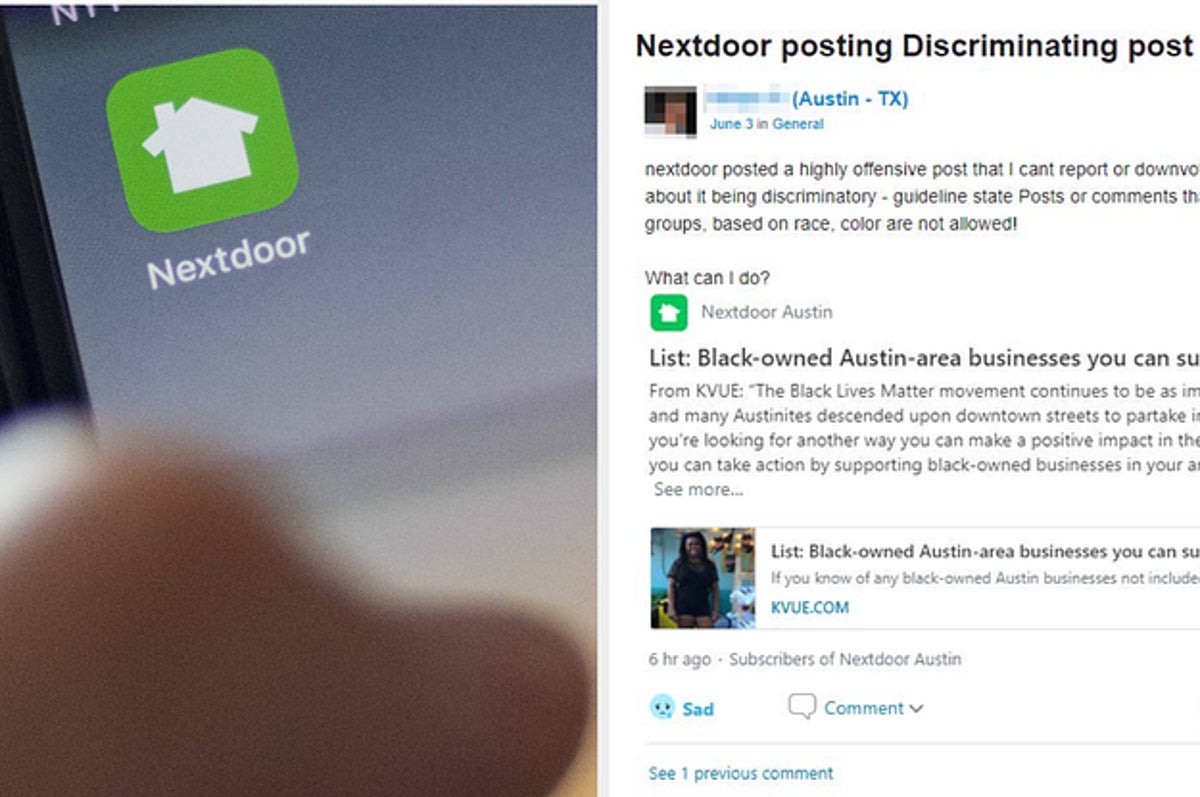 Some moderators on Nextdoor, who have the power to remove posts and comments, are livid that the company that runs the neighborhood social networking platform voiced its support for Black Lives Matter, according to internal communications obtained by BuzzFeed News.

In a private group called the National Leads Forum, where thousands of volunteer moderators from across the US communicate, members lambasted Nextdoor’s statement in solidarity with racial justice. Many people in the discussion voiced the phrase “all lives matter,” a refrain meant to undercut the message of Black Lives Matter, and tied the nationwide demonstrations to looting and vandalism of businesses.

On Sunday, Nextdoor, a site used by a reported 26.8 million people a month, followed a slew of other companies in posting supportive messages of the movement, tweeting, “Black lives matter.⁣ You are not alone.⁣ Everyone should feel safe in their neighborhood. ⁣Reach out. Listen. Take action.” The message rang hollow for many people who use the site, as well as its critics, who have said the neighborhood social network enables racial discrimination and vigilantism, while perpetuating fear and bigotry.

On Wednesday, BuzzFeed News reported that moderators had censored people’s posts stating “Black Lives Matter” and stifled conversations about race, police brutality, and protests. Nextdoor later restored some of those posts after BuzzFeed News inquired about the takedowns, with the company attributing the issue to confusion among its leads.

Despite this claim, forum posts obtained by BuzzFeed News showed anger and confusion among many of Nextdoor’s moderators, an unpaid group that numbers in the thousands. (Nextdoor declined to say how many leads it had.) In a heated thread that started Sunday and has lasted for several days, moderators skewered the platform for supporting the movement.

“Of all the dumb things I’ve ever seen [Nextdoor] do, this is by far the most stupid move (by far IMO), [Nextdoor] has ever made,” a moderator from Durham, North Carolina, wrote on May 31, calling Black Lives Matter “a topic that’s going to ignite people.”

A lead from Orlando said she wanted to see a “White Lives Matter” statement, or one saying “Red Lives Matter” because her husband was “an American Indian.”

“Sometimes we need to remember ‘All lives matter’!” she wrote. Nineteen other people agreed with her post, according to screenshots sent to BuzzFeed News.

Leads from other communities, like Killeen, Texas, and Las Vegas, agreed, demanding to know why the platform had chosen to wade into what they felt was a national, “triggering” political issue that they did not want to be involved with, and that should not involve them. Nextdoor has a policy that typically prevents national political issues being discussed on its site, as well as rules like “Don’t use Nextdoor as a soapbox.”

While many demonstrations against the police killings of George Floyd and Breonna Taylor have been peaceful, some leads conflated Black Lives Matter with looting and vandalism.

“The problem is the rioting,” said a moderator from Anaheim, California. “Nobody should ‘support’ violence of any kind. I think [Nextdoor] should rethink their posting and change it…do not fuel violence and no post should be made by them that creates controversy and grey areas and upset anyone.”

The Orlando lead agreed, writing: “it sickens me that businesses are being burned, homes vandalized, all because ‘black lives matter…’”

The company has since moved to distance itself from the views of some moderators.

“We want all neighbors to feel welcome, safe, and respected when using Nextdoor,” a company spokesperson told BuzzFeed News on Thursday. “As a community-building platform, racism has no place on Nextdoor and is completely counter to our purpose, values, and Community Guidelines.”

But Josh, a lead in a Los Angeles neighborhood who only wanted to be identified by his first name, told BuzzFeed News the company’s guidelines aren’t really followed: “it’s kind of the wild west.”

“There’s very little, if any guidance or leadership from Nextdoor in regards to their moderation policies,” he said. “And because of the lack of guidance, that almost always falls directly in line with their personal politics. They give their army of free moderators zero guidance and free reign to do whatever they want.”

Josh said Nextdoor handed him the reins to moderate his community after he complained about posts perpetuating violence against people experiencing homelessness. Watching how other moderators discuss issues in their regions, he said the platform’s “wishy-washy” policies have enabled racial bias.

In an attempt to quell the furor, Gordon Strause, the company’s director of community, wrote on the leads forum on Monday from his “own perspective” and not “on behalf of Nextdoor.” Noting that “it’s of course absolutely true all live [sic] matters, whether they are black, white, brown, blue, or any other color,” he explained his views on Black Lives Matter.

“The goal of the BLM movement, at least as I understand it, is simply to make the point that black lives matter as much as any other lives but too often in America that isn’t actually what happens in practice and this dynamic needs to change,” he wrote.

“While no one that I know or respect believes that looting helps anything, there are folks that I respect (including people in my own family) who believe that riots may be a necessary step to help the country finally understand the scale of injustice that has been happening,” he wrote, “while other folks I respect believe that the riots will be counterproductive and will only undermine the goals they are meant to achieve.” Strause then went on to recommend a book from psychologist Jonathan Haidt and urged leads “to listen and not to judge.”

“While Nextdoor is generally not the place for discussions of national issues, I think it’s going to [sic] hard to restrain those discussions in the coming days without being perceived as taking sides. So rather than trying to do so, I would recommend that Leads instead focus on a different goal: keeping the discussions as civil and issue focused (rather than personality focused) as possible,” he wrote.

That plea has not appeased some leads. According to one moderator who spoke with BuzzFeed News on the condition of anonymity, Nextdoor, which has the ability to share company-generated content, has been sharing stories on how to help Black-owned businesses in neighborhood feeds across the country, much to the dismay of some of his fellow community leaders.

“Nextdoor posted a highly offensive post that I can’t report or downvote,” a lead from Austin complained on the forum on June 3. “I have received numerous comments about it being discriminatory-guidelines state posts or comments that discriminate against, threaten, or insult groups, based on race, color are not allowed! What can I do?”

The post, which the moderator called “discriminating,” was a list of “black-owned Austin-area businesses you can support” and linked to a story from local news outlet KVUE.

“I had a similar one posted here,” a lead from San Antonio replied. “Not much anyone can do about it, seems [Nextdoor] is a big supporter of BLM despite their well documented controversies. [Nextdoor] has also singled out black-owned businesses as needing help in a time when all small businesses are suffering.”

Scott Micciche, a 51-year-old former lead for a community in Sacramento, told BuzzFeed News that he had never experienced racism when sifting through community content for more than four years, but he would often see it come up in the National Leads Forum. The decisions to take action on posts were sometimes arbitrary, he said, depending on “the way people were brought up” and less on the actual rules.

“An African American guy on the street with two bikes would always automatically be seen as a crime,” he said. “There is deep-rooted racism in Nextdoor, like with the woman in Central Park and the man who was watching birds. It’s a lot like that.”

Micciche noted that Nextdoor’s leads often perpetuate those biases because new leads are sometimes picked by current or outgoing leads who know them.

“It’s really loose at that level, really unmanaged,” he said. “National doesn’t pay too much time because they don’t want to pay anybody. And it’s unclear what someone’s ethical values are until they’re tested as a lead.”

A Twitter Bug May Have Kept You From Muting “WandaVision”
Why Don’t We Have More COVID-19 Drugs?