Ring Has Partnered With 350 Fire Departments 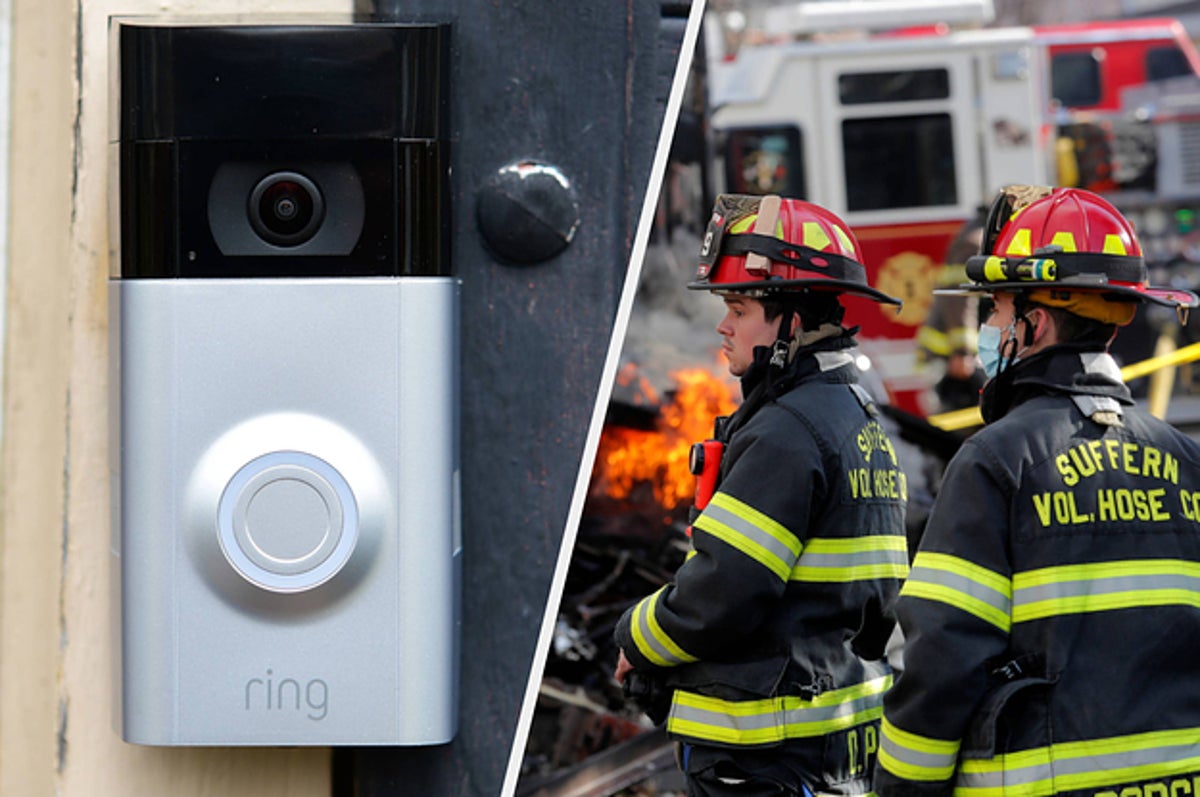 Amazon-owned security camera company Ring has expanded its neighborhood surveillance network partnerships to include local fire departments. The company, which has already established relationships with some 1,800 police departments, has signed agreements with at least 350 fire departments in just a year.

The company touts its network of home security cameras as a useful tool in arson investigations, since it allows agencies to request footage directly from civilians without a warrant, according to documents obtained via public records requests from 11 fire departments that have partnered with Ring. A Ring spokesperson told BuzzFeed News that fire departments have issued 214 requests for footage in the past year.

And, as Ring did with its police outreach, it is working hard to shape and control how local fire departments talk about the company to their communities. Ring provides them with boilerplate press releases, informational flyers, and social media posts — which encourage people to “spread the word out to the community” about Neighbors, its neighborhood watch app, with download links for the app.

Ring’s expansion into fire departments comes as companies like Nextdoor and Citizen compete to own the intersection between private home security, public surveillance, and law enforcement. It also comes amid growing concern over the type of dangerous vigilantism that such platforms can inspire. Last month, Motherboard reported that Citizen CEO Andrew Frame sparked a vigilante search, offering $30,000 to any users who could “hunt down” a person the company had wrongly identified as an arsonist.

Over the past few years, the relationship between Ring and local police departments has prompted Senate investigations and activist campaigns. Its contracts with police, which began in 2018, have historically required police to promote its products and get anything police post about Ring approved by the company first.

Although the documents obtained by BuzzFeed News show that Ring now claims “no endorsement or promotion” of its products is required, this is not fully true. The company still requires agencies to get anything they say about Ring approved by it first. Ring representatives frequently email to remind fire departments of this, in bold and italic font, according to the documents. And that’s not an empty promise, since Ring can remove a public agency from Neighbors at any time for any reason.

A Ring spokesperson told BuzzFeed News that this policy is in place to make sure public agencies don’t say blatantly incorrect things about the company. However, this policy also allows Ring to incorporate marketing points — like how “Neighbors brings residents together” — into posts from public agencies.

It is unclear if any public agency has been removed from Neighbors. (Ring declined to say.) But in reading documents from more than 150 public agencies that have partnered with Ring over the course of almost three years, every single one went along with the company’s messaging.

Ring’s public agency partnership program has involved controversial tactics. It has given free cameras to police that drove Neighbors downloads, scripts telling them how to discuss the company, and maps of the Ring cameras in their area. Some cities have even subsidized camera discounts using taxpayer money and promised free cameras to people who agree to testify against their neighbors in the event of a suspected crime.

The talking points Ring gives to police are less detailed than they were in the past, and Ring says it doesn’t give free cameras to the police anymore — but major aspects of its partnership program have remained intact.

A Ring camera owner can refuse a request for footage from a firefighter or police officer. However, the agency can just contact the company directly and ask for it in the case of an “uncooperative or unavailable” camera owner. These agencies can also obtain a court order, warrant, or subpoena and get this footage directly from Ring or Amazon without the owner’s permission. In its public disclosures, Amazon does not say how often it complies with requests for footage from law enforcement. Ring also will not release the data.

A Ring spokesperson said that in addition to working with police and fire departments, the company helps locate missing children for the National Center for Missing & Exploited Children and assists in blood drives by the Red Cross. It also provides local information in the Neighbors app about the weather and COVID-19 rates.

However, Ring did not address the majority of questions from BuzzFeed News, which included inquiries about how often users comply with public agencies’ footage requests and how often the company complies with requests for information from law enforcement departments.

“When a crime occurs, enlist the help of your community by requesting videos from users via Ring through the video request feature,” Ring representative Aaron Lok told firefighters in South Charleston, West Virginia, on May 13, 2020.

Per FBI statistics from 2019, there were 10.9 arsons for every 100,000 US residents. But Glenn Corbett, a professor of fire management at John Jay College of Criminal Justice, told BuzzFeed News that video footage can be used to determine the origin, cause, and path of a fire as it spreads, in the case of both arson and accidental fires.

“It’s not simply about arson — most fire departments are charged with determining the origin and cause of all fires, including accidental causes (the majority of cases),” Corbett said. “Videos are now being used more often in establishing specific (usually electrical) devices that start fires. That’s very important in determining responsibility for insurance purposes.”

Documents from the Garfield Heights, Ohio, fire department show this feature in action. On June 24, 2020, Captain Joseph Warner requested footage recorded in a 15-minute period four days earlier. His message was vague, containing no information about what incident had occurred, why he needed it, or how many people he had contacted to request it.

“If anyone has video from the fire that occurred we would like to have it for our report,” he wrote. “Any help is appreciated.”

Warner later told BuzzFeed News that the incident in question was a house fire and that the department determined it was “not arson.”

The request — which was sent to Neighbors app users from Ring on Warner’s behalf — noted that residents were not required to share footage. If they did, the note said, the fire department would also get their street address and email. (People can also opt out of receiving these requests in the future — a feature implemented in early 2020 following almost a year of critical media coverage. Another new feature as of this week makes it so these requests are more transparent and posted publicly on the Neighbors app rather than being sent in private.)

Warner told BuzzFeed News that no one shared footage with him. But he was hoping for multiple angles, providing views “from across the street and two to three houses down each side.”

Ring’s partnership contract, previously known as a “memorandum of understanding,” was rebranded in recent months as an “acknowledgement form.” However, some agencies are under the impression that an acknowledgment form isn’t a contract at all.

“They offer [a] free community outreach platform with no contract agreement,” one firefighter from Valparaiso, Indiana, told another in a June 2020 email. “The only thing they require is the attached Acknowledgement Form.”

However, the acknowledgment form is a signed agreement, requiring public agencies to “publicly announce your participation in Neighbors,” among other things. And while the form claims that “No endorsement or promotion of Ring products or services is required” — a change from previous versions of the contract, which required this explicitly — that’s not exactly true.

Ring closely controls what partnered public agencies can post about it, and the company writes posts for them that encourage people to download the Neighbors app and enter its product ecosystem. It also provides templates for both press releases and social media posts — all agencies have to do is fill in their name.

Ring representatives repeat, frequently, over email that anything the fire departments say about the company must be approved before it’s posted. The terms of service for public agencies using the Neighbors app say they can’t mention Ring’s name or use its logo or likeness “in any advertising or press release without prior written approval of Ring LLC or such affiliate.”

If a police or fire department violates the Neighbors rules for public agencies, Ring has the right to boot them from the platform for good. Ring declined to say if it has removed any agencies from Neighbors.

“We are encouraging each and every one of you to spread the word out to the community about the Neighbors App,” the fire department in Garfield Heights, Ohio, posted. “To download please text ‘jointoday’ to 555888.” A Google search of this phrase yields dozens of other identical posts from fire and police departments in communities across the US announcing Ring partnerships.

Ring also provides basic PR talking points to fire departments. It’s given standardized comments to police before, but the company’s new material includes language about how it protects people’s privacy.

These talking points on privacy are also on a “fact sheet” that Ring gives to police and fire departments using Neighbors. Certain things on the sheet are true, like the fact that public agencies don’t have access to cameras’ livestreams (except in Jackson, Mississippi, where the city did a trial for such a thing in 2020). But other items on the list — like the assertion that Neighbors “does not provide public safety users with the addresses at which any devices are posted” — are a bit murky. In 2019, Gizmodo found that Neighbors posts are publicly tagged with highly precise coordinates. With a little digital forensic work, it’s possible to locate any poster’s address using the information. (Ring says it’s “implemented a minimum obfuscating distance requirement.”) In at least one instance, Ring gave a map of camera locations to a county sheriff’s department that was considering a partnership.

In partnering with fire departments, Ring frequently emphasizes that posting on Neighbors will “make safer, stronger neighborhoods” — but it’s important to note why it partners with police and why it exists within Amazon.

For Amazon, Ring is a node in its Alexa-driven smarthome ecosystem and another vector for data collection. It’s also a way to address Amazon’s persistent struggle with package theft.

And for Ring, partnering with police departments has been a way to brand itself as “a friend of police” and an “antidote to fear of crime.” As it partners with fire departments, the benefits for the company seem threefold: It makes connections with government agencies, improves its image by associating with nonpolice agencies, and continues to cast itself as a proponent of law and order.