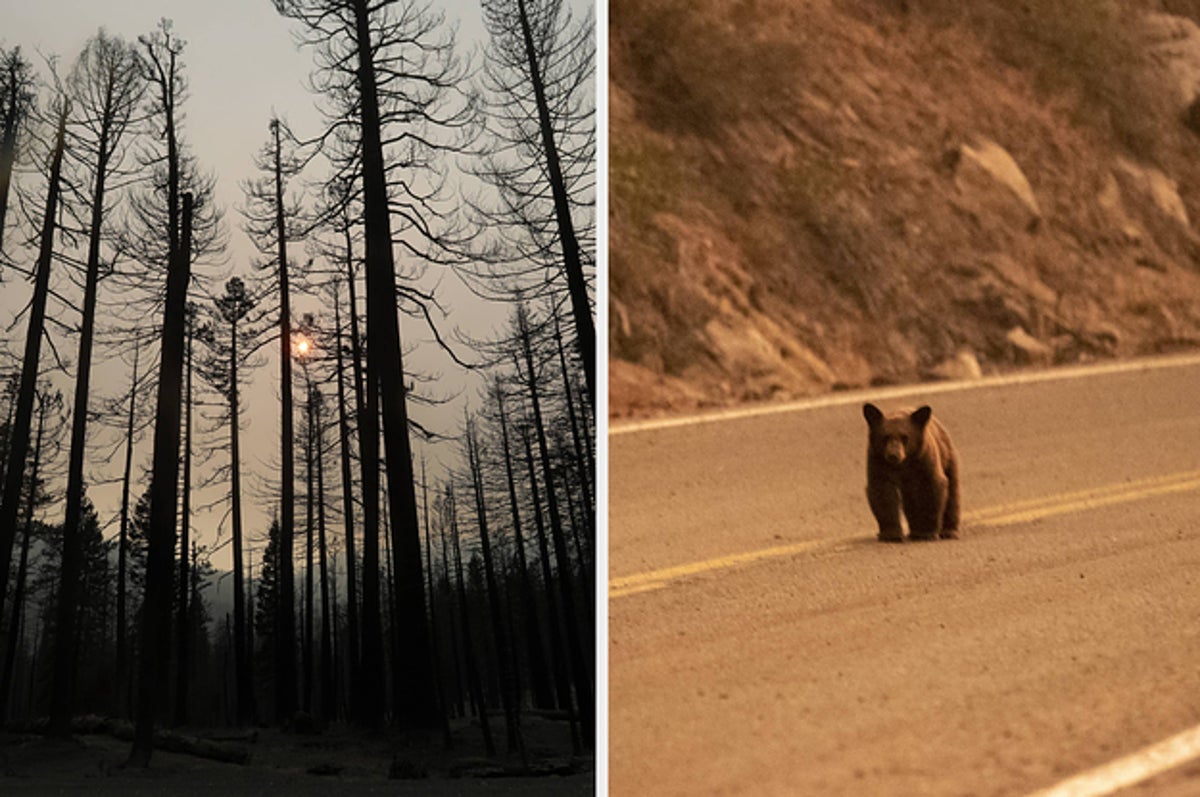 SOUTH LAKE TAHOE, California — Brian Hunter hadn’t yet been ordered to leave his South Lake Tahoe home. But, thinking back to how a wildfire tore through the town of Paradise three years ago and killed 85 people, he didn’t want to risk it. As flames crept toward the Tahoe Basin, he and his partner loaded the car with their belongings, their dog, and two cats, and drove off into the haze. Behind them, a wall of thick brown smoke bore down on the city.

The next morning, thousands of others living along the south and southwestern shores were told to evacuate immediately. Just hours later, the Caldor fire moved into the basin after becoming only the second inferno on record to cross the Sierra Nevada mountains. And with dangerous winds forecasted to blow through the drought-parched forest, the blaze threatened to decimate South Lake Tahoe.

And yet the lakeside city of 22,000 was spared. As of Friday, no one was killed in the blaze and officials believe not a single home in the Lake Tahoe Basin was destroyed. However, the fire, which was 53% contained, had so far consumed more than 218,000 acres and burned down 782 homes elsewhere. And a red flag warning remained in effect for the Tahoe area through the evening due to forecasted gusty winds that could increase fire danger.

Officials have credited aggressive firefighting operations as well as fuel management efforts by residents and local agencies as key factors in averting a disaster. But while the harm to structures has so far been limited, the consequences for the environment could still be devastating.

Smoke and ash from the Caldor fire — and other major fires — have already clouded Lake Tahoe’s famously clear waters, scientists say. In the slopes below Echo Summit, charred trees sit precariously in dried-out soil that, if not restored in time, could erode and cause debris flows when the winter rains come or snow melts in the spring. Wildlife, like bears and spotted owls, are at risk of being displaced. Local advocates and wildland firefighters fear that popular trails and watershed areas may have been burned, leading to more nutrients that feed algae flowing into the lake. When the flames are snuffed out and the smoke finally clears, it may take months, or years, for the lake and the forests around it to recover. And with the threat of more catastrophic wildfires due to human-induced climate change, some wonder whether one of California’s most beloved places will ever be the same.

“If I did not live in Tahoe and … I see this is a few years in a row now where the forest is getting shut down, the smoke is just too unhealthy to do anything fun outside, I wouldn’t plan a trip,” said Patrick Parsel, a South Lake Tahoe resident and trails director for the Tahoe Area Mountain Biking Association.

Treasured for its deep blue waters and idyllic surrounding mountains, Lake Tahoe attracts about 15 million people each year, according to the local visitors bureau. Generations have made memories skiing at resorts boasting breathtaking views of the large alpine lake, which straddles the California–Nevada border. In the summertime, locals and tourists hike and bike their way around more than 300 miles of trails, sunbathe on the beaches, and spend time on the lake itself.

All of this, however, has come with an environmental cost. The lake’s average clarity, which is determined by submerging a 10-inch white disc until it’s no longer visible, decreased from more than 100 feet in the late 1960s to 63 feet in 2020, according to the Tahoe Environmental Research Center at the University of California, Davis. Geoffrey Schladow, director of the center and a professor of water resources and environmental engineering, said the two main factors for the decline are development in the basin and the introduction of a non-native shrimp that was meant to provide food for fish commonly caught for sport.

“That sort of backfired because it totally changed the food web and removed a zooplankton that was very effective at removing fine particles and fine algae that [worsen] clarity,” Schladow said.

Over the last 20 years, clarity measurements have plateaued around 65 and 70 feet, even as agencies and residents have taken more steps to protect the lake and its watershed. “Some years it’s worse, and some years it’s better,” Schladow said. Conservationists’ goal is to bring the lake’s clarity back to what it was 50 years ago, but the fires could make that more difficult to achieve.

Not only do ash and particulate matter from the smoke end up in the lake — providing more nutrients for algae to feed on — but they also block sunlight and ultraviolet radiation from penetrating its waters. Normally, that radiation helps kill off invasive species that threaten the fragile ecosystem, but for the last couple months, there’s been smoke in the basin.

Recent clarity readings have dipped as low as 50 feet, Schladow said, though it’s not that bad every day and everywhere on the lake, which stretches across 191 square miles. It’s still unclear how long the reduced clarity will persist and how much of a threat the fires pose to the long-term health of the lake.

“Is it just a little change that after a month or two will go away and the lake will go back to what it was? Or is this now going to be enough year after year to cause some kind of regime shift?” Schladow said. “I’m not trying to say the sky is falling, but it may be. We just don’t know yet.”

Historically, low-intensity fires have occurred naturally in the Tahoe Basin, and the Washoe people who lived in the area have practiced cultural burnings. But after European settlers arrived in the mid-1800s and pushed out the tribe, loggers cleared approximately 60% of the basin’s trees, according to the US Forest Service. The forests eventually recovered, but decades of fire suppression have left them vulnerable to more severe blazes.

Scott Stephens, a professor of fire science at the University of California, Berkeley, explained much of the forest on the western side of Echo Summit, where the Caldor fire originated, hadn’t been thinned, leaving lots of fuel to burn through. That, combined with the drought conditions in the Sierra Nevada, resulted in flames that were much more intense than the more restorative, low-intensity fires of the past.

Still, Stephens said, in some ways, the Caldor fire could help thin the overgrown parts of the forest in and around the basin as fire activity slows down, which it has done in recent days. But in areas where it moved rapidly, burning through dense, dried-out groups of trees, there could be significant damage to the soil, erosion, and a large increase in nutrients running into the lake.

“Like so many things in nature, it’s two-edged,” said Lisa Wallace, executive director of the Truckee River Watershed Council. “There’s definitely a beneficial role of fire in helping an ecosystem rejuvenate and regenerate, but there’s an amount of it that’s too much.”

It’s not yet clear how much damage there has been in and around the streams, meadows, and marshes that drain into Tahoe. Of particular concern has been the Upper Truckee River, the largest of the 63 tributaries that flow into the lake. Over the years, urban developments have disturbed the river. An ongoing project to restore its marsh — which, when functioning properly, catches pollutants and other nutrients that would otherwise run into the lake — is still a couple years away from completion, according to Jesse Patterson, chief strategy officer for the League to Save Lake Tahoe, the nonprofit behind the Keep Tahoe Blue stickers spotted on cars across the West.

Maps of the Caldor fire burn area show that the river itself seems to have dodged a bullet, but charred materials could still spill into the Upper Truckee and ultimately to the lake. Other smaller tributaries may also have been impacted.

“The good thing is the lake is very large; it can handle these impulses, these inputs,” Patterson said.

But, he added, fires are now regularly breaking records in California, and no one knows at what point it could become too much for the lake. “My concern will always be the tipping point,” he said.

While much remains unknown about the long-term impact on the lake, you can already see how the fire is affecting wildlife and outdoor recreation. Bears have already been spotted roaming around residential areas in South Lake Tahoe. With consistently unhealthy air and the closure of California’s national forests, hikers and mountain bikers are staying away.

“Pretty much every August, we’re getting just really unhealthy air quality and that just makes it difficult, for one, for people to get out and recreate and, two, for us to have volunteer trail [maintenance],” said Parsel, whose mountain biking association maintains about 100 miles of trail each year.

The fire seems to have burned over several popular trails near the south shore, he said. It could take a long time for crews to clear and stabilize them so they’re safe for users and won’t contribute any additional runoff into nearby streams. And with the winter approaching, the window of time during which they can work is narrowing.

“It’s going to kind of be all hands on deck once we are able to get out and access these sites that could be damaged,” Parsel said.

Still, scientists and locals are optimistic that the community — and the lake — can and will recover. They also hope the realization that even Tahoe is not immune from climate change will inspire others to do their part to reduce greenhouse gas emissions and work to build more sustainable communities.

“I hope this fire is really a wake-up call, that it can happen in Tahoe, and we need to understand what that’s going to do and how we recover from it,” said Patterson of the League to Save Lake Tahoe.

The 41-year-old South Lake Tahoe resident, who has spent his career trying to protect natural resources, said he was particularly struck by the images of snowmaking machines being used to ward off the Caldor fire.

“It shows the fragility of us in the wild,” he said. “We can live within nature and enjoy it and recreate and appreciate it, but you also have to respect it.”

Sitting in the smoke last week outside his home in Meyers, the community of A-frame houses and cabins often considered the gateway to South Lake Tahoe, longtime resident Joe Anderson reflected on the beauty that lies in the basin. Around him, fire crews dug containment lines to keep the flames from reaching homes.

Anderson, a 66-year-old retired firefighter, said he and his dog Echo usually walk up into the mountain every day. He was anticipating how his next time on the trails would be different.