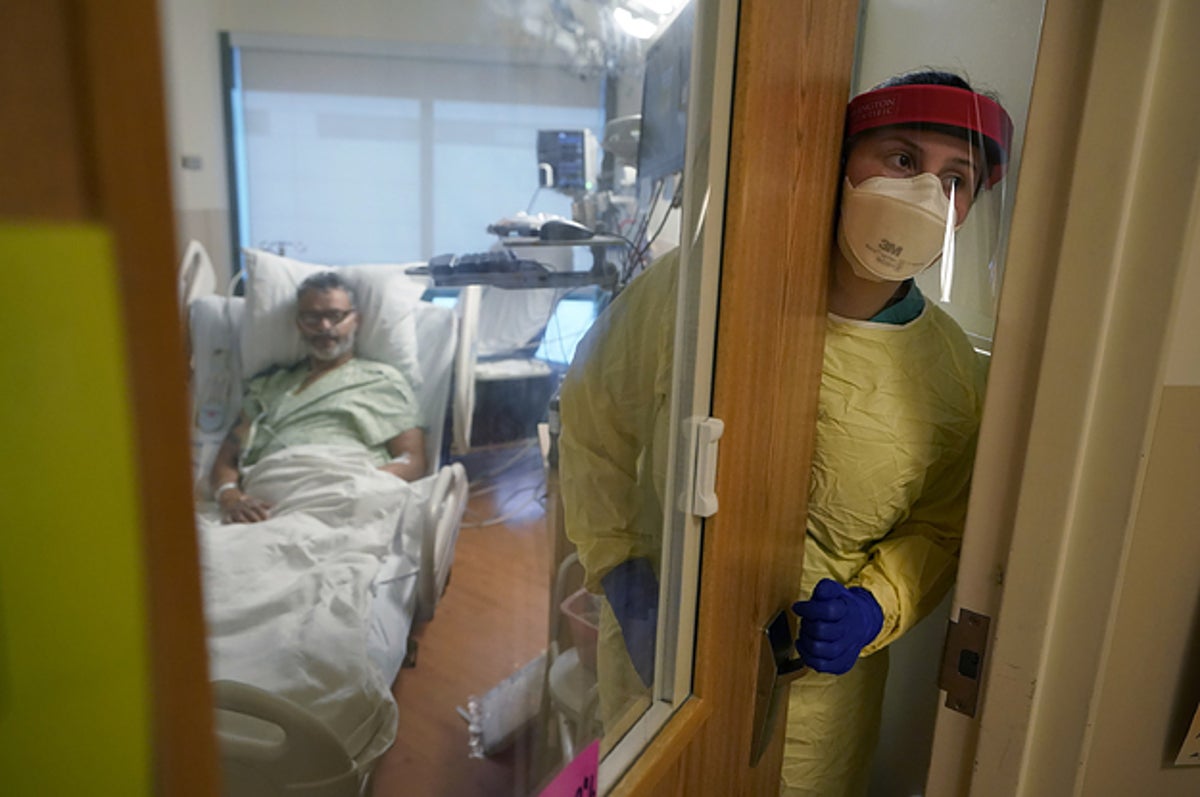 In Chicago, patients are being treated in hospital hallways and in office chairs.

In Farmington, New Mexico, military reinforcements have been deployed in civilian hospitals from over 700 miles away in San Diego.

And in Paterson, New Jersey, nonemergency surgeries have been canceled. A gallbladder condition that might typically require removal? Try antibiotics first. A bone fracture for which you might normally go under the knife? Let’s put you in a cast and crutches for a bit to see how you fare.

This is America in the Omicron wave. US hospitals and their staff are currently being tested in new and challenging ways that are unlike previous surges in the pandemic, medical workers across the country told BuzzFeed News. Patients who might normally be admitted for observation are being sent home to keep beds available. Others are waiting 10 hours or more in emergency rooms to be seen, before perhaps giving up and walking out altogether.

Reaching the breaking point is a deceptively slow process, but little by little Swaminathan said his hospital and others are losing the things they need to keep running effectively. “This collapse is not going to be like an armageddon. It’s not going to happen all at once,” he said. “It’s going to be fairly silent, and people aren’t going to realize it until they call 911 and no one comes.”

As Omicron spreads, COVID cases are surging at record levels in all 50 states. But given the relative mildness of the variant for most people, especially the vaccinated, Anthony Fauci and others have said it is now more relevant to pay closer attention to hospitalization data than total case numbers. Yet, that too is alarming. More than 147,000 people are currently in US hospitals with COVID — more than at any point in the pandemic to date. CDC Director Rochelle Walensky said Wednesday that the seven-day average of hospital admissions had risen 33% over the prior week to about 19,800 per day.

Importantly, those figures include people with an incidental case of COVID, meaning they came to be treated for something else and were found to also be positive for the virus. But while that may sound less worrying, it can be deceiving. COVID may be exacerbating some people’s underlying health issues and, crucially, the net effect on hospitals is the same: more patients taking up more beds and requiring special isolation and safety protocols so as not to infect others.

While new studies are showing Omicron is less severe and requires hospital stays about 70% shorter than Delta on average, the incredibly transmissible variant is still spreading like wildfire, including among children, who are being admitted to hospitals with COVID at record rates. “The risk of hospitalization remains low, especially among people who are up to date on their COVID vaccines,” Walensky said Wednesday. “However, the staggering rise in cases — over 1 million new cases each day — has led to a high number of total hospitalizations.”

All this while more and more medical workers are themselves testing positive and being forced to the sidelines, leaving their colleagues — at least, those who haven’t left the profession altogether due to burnout — straining to treat the patients turning up in droves in their emergency rooms with COVID, yes, but also for any other medical condition or traumatic injury.

The cruel irony, then, is that what appears to be the mildest widespread variant of the coronavirus is the one that risks toppling the US hospital system.

“Before this if you had an acute life- or limb-threatening medical issue and you went to an emergency department in America, you would have a promise that it would be quickly taken care of,” said Gabe Gao, an ER physician at St. Luke’s Hospital in New Bedford, Massachusetts. “I don’t think we can keep that promise right now.”

Not every hospital is currently facing a crunch. Some that previously experienced huge waves are holding steady — for now. “In the first wave, I had 400 patients with COVID, now we have 100,” said Aaron Glatt, chair of the department of medicine at Mount Sinai South Nassau on Long Island, New York. “We have better treatments, we have a better understanding of the virus, but at the same time, two months ago I had 10 patients with COVID.”

Michael Daignault, an ER doctor at Providence St Joseph Medical Center in Burbank, California, said he was so shaken by the surge of cases in his area last winter that he felt the current moment was more manageable. Before patients might stay for weeks or months at a time in the ICU, but now that tends to be different. “The majority of patients that are getting admitted have less severe illness. The average length of stay has gone down,” he said. “It’s a quicker turnover. We’re able to handle it.”

But both Daignault and Glatt said they had still experienced staffing shortages, with hospital workers out sick from the virus. They also noted they live in states with relatively high vaccination rates. New York, for example, has almost 20% more people fully vaccinated than in Missouri, where total hospitalizations are now above their worst previous levels.

“Not sure what else to tell you. These are very difficult times,” he said.

In Idaho, the state with the lowest vaccination rate where less than half the population is fully vaccinated, the Omicron surge could be disastrous. Many hospitals there have only recently pulled themselves out of crisis standards of care following an overwhelming surge of Delta cases in September. Susie Keller, the CEO of the Idaho Medical Association, said her members have barely caught their breath from that trauma and are now staring down the likely prospect of another wave. “They just feel completely besieged,” Keller said. “It’s another thing on top of everything else.”

Keller implored those in her state who have not received a vaccine to do so, lest they take up a hospital bed that could go to another person who has had their shots and comes to be treated for COVID or something else, only to discover medical assistance is in short supply. “It’s absolutely unfair, and it’s a very sad situation,” she said. “My heart truly goes out to those folks who are trying to do the right thing and for circumstances beyond their control end up in a hospital where the resources aren’t there.”

There are signs that some places hit early by Omicron have seen the worst of their spike in infections, although hospitalizations have previously tended to lag case counts by about two weeks.

But other states are still yet to reach their Omicron peak, including Arizona, where in a press briefing on Tuesday, Marjorie Bessel, the chief clinical officer at the Phoenix-headquartered Banner Health, which employs over 50,000 people across the American West, pleaded with people to be patient with staff in the days and weeks ahead. More employees are calling out sick, she said, meaning patients are experiencing longer waits than normal.

In an effort to reduce the total number of medical staff out sick at any one point, the CDC announced just before Christmas that asymptomatic medical workers could return to work after seven days, instead of 10, if they test negative. Medical staff who have received their booster shots also now no longer need to self-quarantine at home following high-risk exposures.

One ER physician in Manhattan, who asked not to be named in order to speak freely about conditions at his hospital, said that this change in CDC policy had lessened nursing shortages at his facility, but he noted doctors were still often performing nursing tasks, such as administering IVs or discharging patients.

“There are obviously concerns,” he added. “I think there’s still not great evidence about how long you’re contagious, and I think it’s a rule made out of understandable necessity because otherwise we wouldn’t have enough medical workers, but on an individual level it’s hard to reckon with the idea of coming back and potentially infecting other staff members.”

Across the city in Brooklyn, another ER doctor not authorized to speak with the media said she too was having to take on more tasks usually carried out by nurses or patient care technicians, in addition to her own work. She’s only been a working doctor for a year and a half, but the staffing crunch has her feeling more overwhelmed than ever. “Sometimes it’s just so busy you don’t even have time to think or have emotions about what’s going on,” she said, “but after your shift ends then it kind of hits you, this wave of exhaustion.”

Gao, the Massachusetts doctor, said he’s noticed classic symptoms of burnout in himself and other colleagues. When he walks into work on a Monday morning and sees 35 or 40 admitted patients taking up beds in the emergency department and another 20 to 30 in the waiting room, he knows he’s in for yet another rough week. It takes a certain mental and physical resiliency to choose to work in the ER, but he worries he’s already been broken by it.

“It’s terrible. It’s awful. It’s the moral injury of all this,” Gao said. “Healthcare should not function on the backs of beleaguered emergency workers that are trying to find the smallest nook and cranny to fit someone into, and that person’s healthcare should not be hanging by a thread as a result of those efforts.”