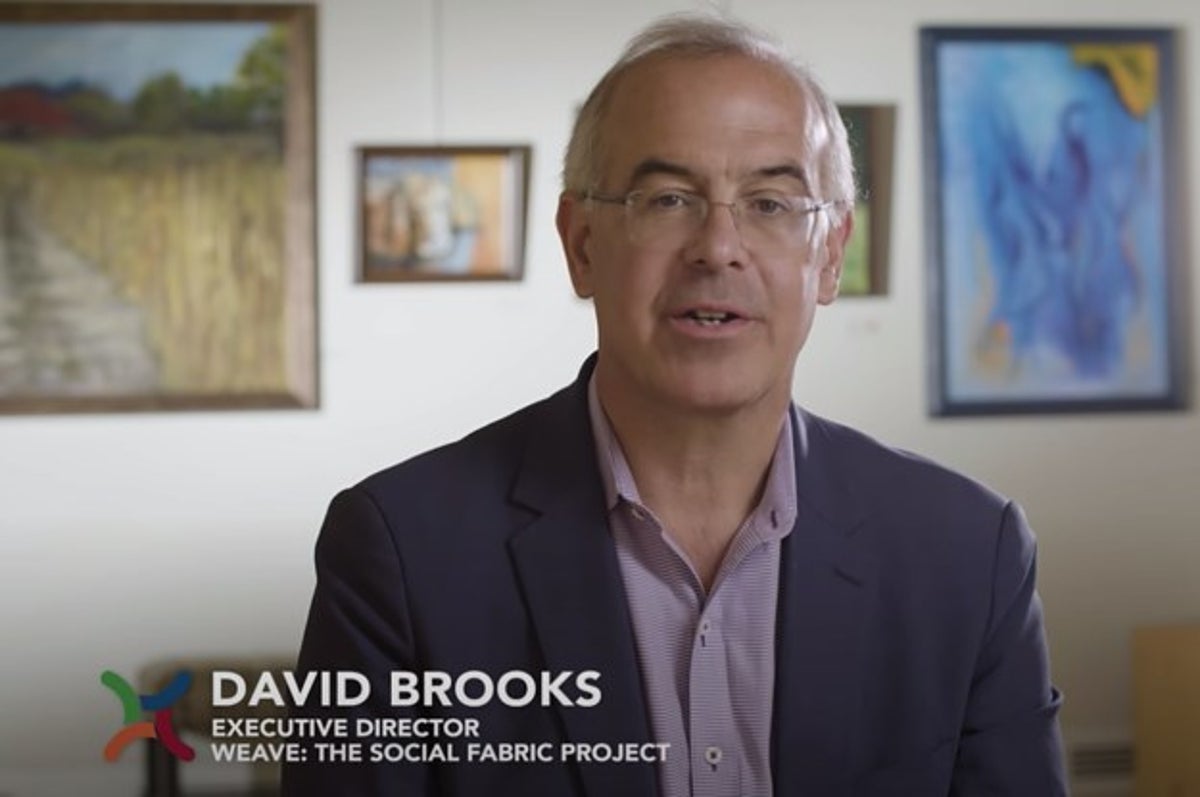 New York Times columnist David Brooks is drawing a second salary for his work on an Aspen Institute project funded by Facebook and other large donors — a fact he has not disclosed in his columns.

A Times spokesperson refused to tell BuzzFeed News whether the paper was aware Brooks was taking a salary for his work on Weave, a project he founded and leads for the Aspen Institute, a prominent think tank based in Washington, DC. The spokesperson also wouldn’t say if the Times knew that Weave took money from Facebook.

In Dec. 2018, Facebook earmarked a $250,000 gift to the Aspen Institute for the project. Three months later, Brooks introduced Times readers to his concept of “Weavers,” which he described as people who fight social isolation by “building community and weaving the social fabric” across the US.

“We need to create a shared Weaver identity,” Brooks wrote in the column “A Nation of Weavers.” To make that happen, Brooks explained, he had started Weave at the Aspen Institute.

Brooks has published multiple columns that promote Weave, in addition to writing pieces that mention Facebook, its founder Mark Zuckerberg, and the company’s products without disclosing his financial ties to the social networking giant.

Brooks has published multiple columns that promote Weave, in addition to writing pieces that mention Facebook, its founder Mark Zuckerberg, and the company’s products without disclosing his financial ties to the social networking giant.

The amount and timing of Facebook’s funding, which had not been previously reported, combined with Brooks’s promotion of Weave in the Times, has raised questions about the columnist’s conflicts of interest. Last Friday, BuzzFeed News reported that Brooks wrote a blog post for Facebook’s corporate website that was timed with the release of a New York University–led study about Facebook Groups that was funded by the social media giant. Brooks did not tell his editors he was writing for Facebook, according to a Times spokesperson.

The Aspen Institute declined to say how much it pays Brooks, but confirmed that “as chair of the Weave project, he is a staff member at the Aspen Institute.” Brooks’s work on Weave means that, in addition to pulling down a salary from the Times, he has a second salaried position that’s funded by donations from companies and billionaire families that hasn’t been disclosed to Times readers.

“We’re in the process of reviewing David’s relationship with the Weave Project and the Aspen Institute, and what disclosures, if any, should be added to David’s columns going forward,” said Eileen Murphy, the senior vice president of corporate communications for the Times.

Murphy said other Times columnists have roles outside the paper. When asked for an example, she cited Paul Krugman, who was a professor of economics at Princeton and is currently a distinguished professor at the Graduate Center of the City University of New York.

“We’re in the process of reviewing David’s relationship with the Weave Project and the Aspen Institute, and what disclosures, if any, should be added to David’s columns going forward.”

Two people who work for the Times and who asked to remain anonymous said they were embarrassed by BuzzFeed News’ previous report on Brooks’s writings for Facebook’s corporate site, in which he extolled the potential of connecting people via Facebook Groups. In recent years, his colleagues at the Times have reported critically on Facebook, detailing how the platform fostered Russian election disinformation, hoaxes, and hate speech.

On Feb. 2, Times tech writer Shira Ovide wrote a newsletter on “How to Fix Facebook Groups,” arguing that the Facebook product was the “common thread” between the spread of the QAnon mass delusion, bogus health treatments, and false claims of election fraud. Three weeks later, Brooks wrote for Facebook’s corporate site in praise of the social network, suggesting that any faults attributed to the platform are due to the people using it, not the technology itself.

“My takeaway from all this research is that it’s not social media that’s the problem, it’s the ideas and behavior of the people who use it,” he wrote for Facebook on Feb. 23.

Brooks began work on Weave in May 2018, according to the Aspen Institute. Its transparency report for that year shows Weave received just over $1.3 million from donors, including the Resnick Family Foundation, the Robert K. Steel Family Foundation, and James Schine Crown, an Aspen Institute trustee who sits on the boards of General Dynamics Corporation and JPMorgan Chase. Weave’s single largest donation, over $300,000, came from Miguel Bezos, the father of Amazon founder Jeff Bezos and an Institute trustee.

Facebook’s $250,000 arrived before the end of 2018 but was not reflected in the 2018 report, the most recent one released by the Institute. The Aspen Institute said Weave has not received money from Facebook since.

A Feb. 18, 2019, column appears to be Brooks’s first mention of Weave in the paper. Brooks told readers that his concern about the lack of social cohesion led to him “starting something nine months ago at the Aspen Institute called Weave: The Social Fabric Project.”

In May 2019, Brooks plugged an upcoming Weave event in a Times column. Three days later, he dedicated his next column to recounting the event, and the Times sent a photographer to document it.

“The people at this gathering are some of the most compelling people I’ve ever met,” Brooks wrote.

Describing how participants shared emotional, personal stories, he wrote that “this was a gathering in which it was permissible to be an angry black person.”

Brooks, who is listed as Weave’s chair on its site, didn’t hesitate to drop mentions of the organization in his columns. But he was less forthcoming about the financial status of his second job and its connection to Facebook. In 2019, as Weave pursued a project with Facebook funding, Brooks peppered columns with mentions of Zuckerberg, Instagram, and Facebook, but didn’t disclose that the company was actively funding Weave — and, by extension, his own salary.

That year also saw Brooks write sponsored content for another supporter of Weave. In Sept. 2019, his byline appeared on a piece published in the Chronicle of Philanthropy to promote Upswell, a conference organized by Independent Sector, a nonprofit. Brooks extolled the benefits of “Weavers” and his project before offering a hearty endorsement of the event.

“This is why we love working with Independent Sector and being at Upswell,” Brooks wrote. “It is an established organization that does convening in new ways. It emphasizes social collision, not panel discussion.”

The article carried a disclaimer that it was “paid for and created by Upswell.”

Brooks and Independent Sector did not answer questions about whether he was paid to write the sponsored content. Brooks spoke at the 2019 Upswell event in a session titled “Weaving Strong Communities.” He was joined by Deepti Doshi, a Facebook employee who works on strategic partnerships and who also completed a fellowship at the Aspen Institute, according to her LinkedIn profile.

Brooks, Independent Sector, and Facebook declined to comment on how Brooks and Doshi came to share the stage at Upswell. A Facebook spokesperson said Doshi did not play a role in Facebook’s decision to fund Weave. Doshi did not respond to a request for comment.

“Strong communities don’t just happen,” read the Upswell program describing the 2019 panel. “They are built and strengthened by people (Weavers) with time, skill and love. David Brooks of Weave: The Social Fabric Project and the New York Times will be in conversation with Deepti Doshi of Facebook around what motivates people to become Weavers and how they learn these weaving skills.”