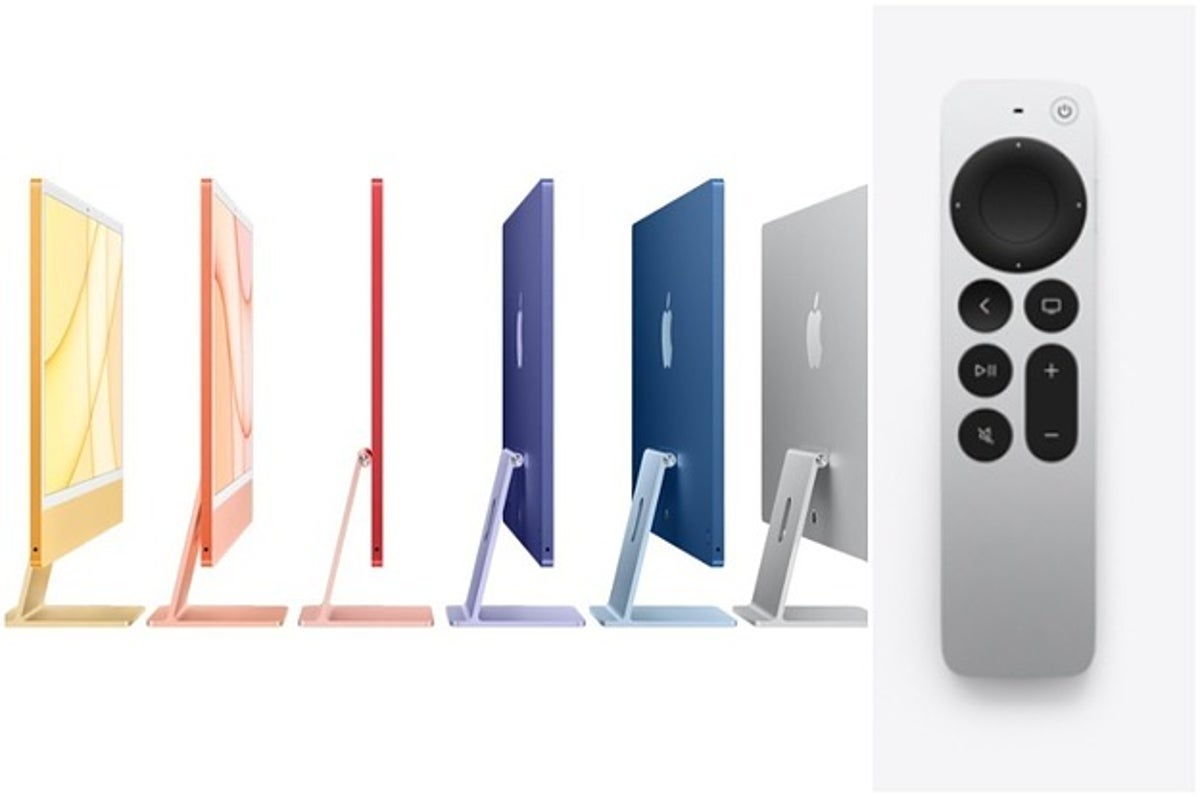 Apple held an event today to announce new products. There are big upgrades to Apple TV, iPads, iMacs, as well as a new product called AirTags.

Here’s everything you need to know.

At today’s Apple event, the company announced a new Apple TV — only the fourth major update to the device since it was first launched in 2012. (The most recent version, from 2017 added 4K.) Today’s upgrade has a faster A12 Bionic chip and focuses on picture quality, optimized for 4K streaming and better HDR frame rate.

One really cool feature is a way to adjust the TV’s color settings through your phone. It uses your iPhone’s color and light sensors to adjust the Apple TV color balance. This is an extremely welcome feature if, like me, you live with someone who is obsessed with constantly fiddling with the color settings on the TV while you’re trying to watch something.

Most importantly, there’s a new remote. The old remote is notoriously bad. It’s slippery in your hands, is awkward to use because it doesn’t have enough buttons, has a touchpad that is touchy, and most importantly, is constantly hiding between your couch cushions.

The new remote has an extra dial button that looks like the classic iPod click wheel to replace the slippery weird touchpad. There’s also a mute button, a more obvious “back” button, and even a power button. Best of all, it’s slightly thicker and bigger — something that you actually want in a remote.

The remote will be sold separately for $59 if you have the older Apple TV and aren’t ready to fully upgrade but hate your remote.

Apple also announced AirTags — a tracking device similar to the Tile. The device is a small circle that you can attach to your keys, luggage, or cat (like one BuzzFeedNews reporter does), and it uses the Find My feature to, well, find your item.

The newer processor uses significantly less power and runs cooler than the last one, which means that Apple was able to cut down on size. At just 11.5mm, the new iMacs are Apple’s thinnest desktop computers yet. They also feature a 4.5K retina display, and True Tone, a feature that’s already available on iPhones, iPads, and MacBooks, and makes the screen blend in with the lightning in your environment a lot better.

Importantly, Apple’s upgraded the cameras, microphones, and speakers in these computers significantly, which means video calls, movies, and music should be a lot better.

Finally, the keyboards that come with these computers now include TouchID, which means you can easily sign in with your fingerprint.

You can order the new iMacs beginning April 30. They start at $1,299 and will be available in the second half of May.

Apple’s brand-new iPad Pros are beasts. They don’t really look that different on the outside, but on the inside, they’ve been completely revamped.

Powering them now is Apple’s new M1 processor, which makes them, Apple claimed, 50% faster than the last iPad Pro. They also have faster graphics, which means you can play console-quality games and edit high-quality 4K footage on the go.

Just like the newest iPhones, they also feature 5G and can be loaded up with storage up to 2 TB if you want to cart around absolutely massive quantities of photos, videos, games, or anything else.

If you use your iPad Pro for video calling, an improved front camera will now track you as you move around the room and intelligently zoom in or out to keep you in focus.