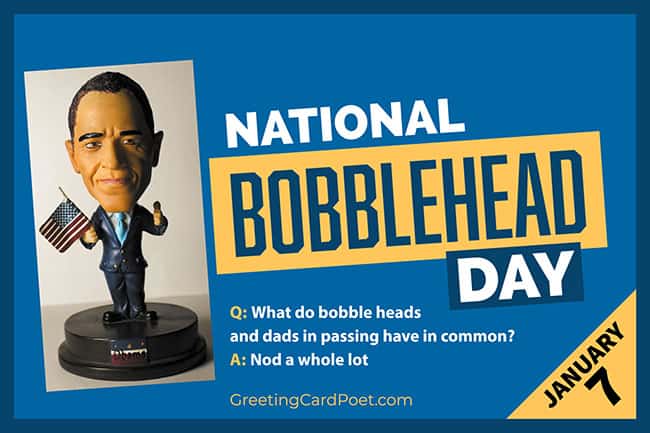 National Bobblehead Day occurs on January 7 each year in the United States. It’s a day for fans, collectors, and kids of all ages to honor the goofy and unconventional toy.

Bobbleheads are iconic to American pop culture. Multiple generations of children likely had a sports bobblehead on their dresser or nightstand growing up. It’s friendly face offered a simple pleasure, set into action by the tap of its head.

Here are some frequently asked questions and answers about the holiday and bobbleheads.

When is National Bobblehead Day?

Why do we celebrate National Bobblehead Day?

How do we celebrate National Bobblehead Day?

National Bobblehead Day is a fun day to celebrate whether you are a collector or just a bobblehead enthusiast. Here are some ideas of how you can get the most out of Bobblehead Day:

What is a bobblehead?

Bobbleheads, a kind of collectible doll, are also known as nodders or bobbers. These small figurines are usually constructed in two parts, the head, and the body, and then attached with a metal spring.

When a bobblehead is moved, or its head is pressed down, the nodding action is set in motion.

What is the history of National Bobblehead Day?

The history of bobbleheads traces back over 100 years. But their popularity exploded in the 1950s and 1960s novelty bobbleheads representing professional sports teams.

A resurgence then took place in the late 1990s as sports teams began using them as promotional giveaways at games. These modern variations showed greater detail and life-like features compared to earlier bobbleheads.

Today, bobblehead collectibles are made to represent a broad range of categories, including sports figures, TV and movie stars, comic and fantasy characters, animals, and pets… just about anything you can imagine!

What was the most expensive bobblehead ever sold?

What are bobbleheads made of?

Typically bobbleheads are made of plastic or ceramic. Plastic designs are lightweight. Ceramic designs are more traditional and for many the preferred look and feel.

How to make a bobblehead?

Use these hashtags when you post your bobblehead pictures to social media. Note that some folks divide the word into two like bobble heads or even hyphenate it like bobble-head.

Date this year and in the future

Find out what day National Bobblehead Day falls on this year with the chart below.