I’m Not Turning Off App Tracking On My iPhone, Because I’m A Total Cuck 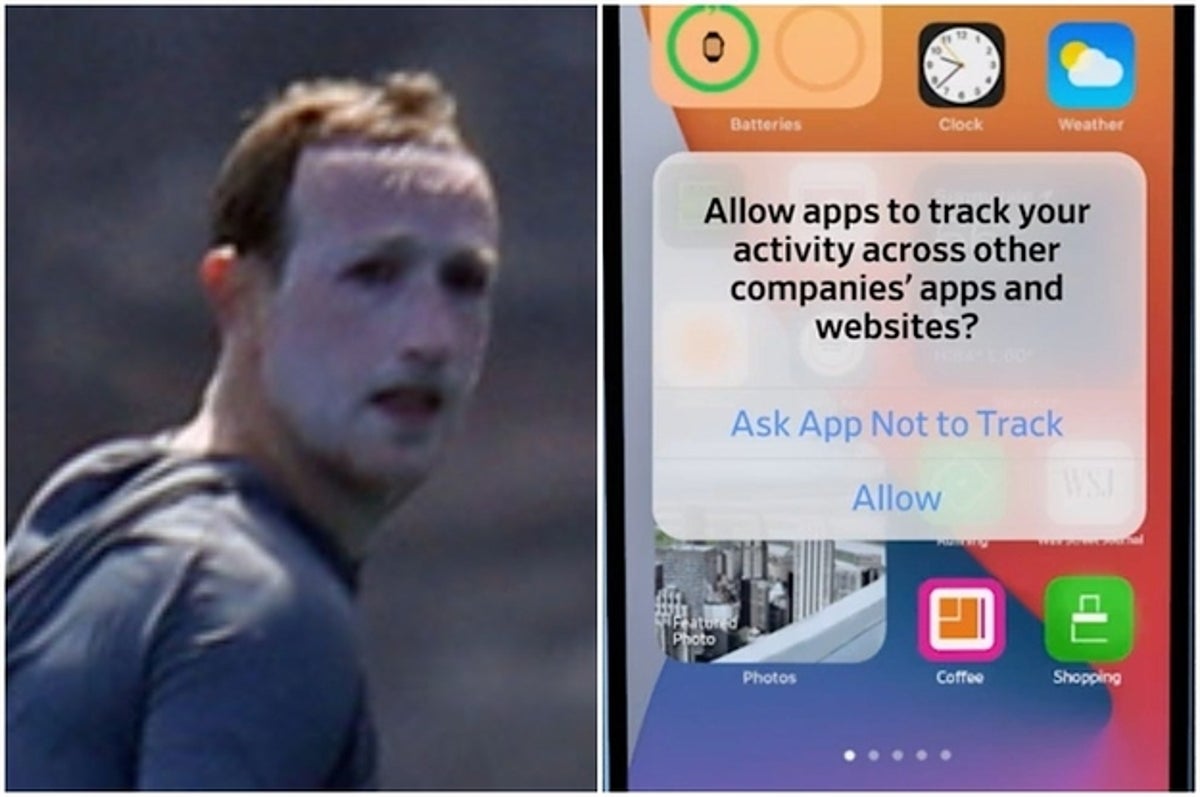 This past Monday, Apple released an update to its iOS that, by default, stops Facebook (and others) from tracking you across apps. As a technology journalist, I 100% recommend that you keep this default setting — it’s a great step for privacy. But for me? No thanks. I’m going to keep giving Facebook my data because I’m an absolutely craven, disgusting, wormy little cuck.

This move by Apple is monumental, and there’s been a bitter fight brewing for months between Apple and Facebook over this, with Facebook even taking out ads just to slam Apple for trying to “change the internet as we know it for the worse.” And while I realize all this, the way I feel about giving over my data to Facebook, even when faced with the chance to stop, is like that classic headline about Trump from the Onion during the 2016 election cycle: “Admit It: You People Want To See How Far This Goes, Don’t You?”

I want to see how far this all goes. I want to follow the rabbit hole and see just how fucked up and awful everything gets when I hand over as much of my personal information as possible to Facebook. I want to be the idiot in the horror movie who goes down into the dark basement. “Hello? Is anyone down there?”

The new iOS feature stops your apps from sharing data about you with one another. Let’s say you’re browsing sneakers on Zappos, then you see an ad for those exact shoes when you open Instagram. That’s because Zappos and Instagram are sharing data with each other. But now, your phone has blocked those apps from talking to each other.

Apple has made this private by default, as things should be! To change this, you have to go to Settings > Privacy > Tracking > toggle on “Allow Apps to Request to Track.” Then, you still have to “Allow” on a pop-up when you open an app.

Now, your iPhone will prompt you to opt in to sharing that data. This is quite obviously a cannon shot across the bow and into the engine room at Facebook. However, the social network insisted in its earnings call this week that it doesn’t anticipate much of a blow to its business.

Facebook argues that the slurry of personal data on which it gorges allows it to deliver better, more personalized ads. It says we much prefer such ads to generic “one weird trick doctors don’t want you to know” banners. You know what? I fucking love my Facebook and Instagram ads. There’s always stuff I want to buy in those ads. That direct-to-consumer swimsuit brand with one shoulder? Yeah, I want it. Weighted blanket? Ya got me. That keychain personal safety alarm with the cute name that you can also buy under 48 different labels on Amazon? I don’t even need it but I’ll click it and put it in my cart for a while before deciding not to buy! I want big daddy capitalism to rawdog my data. Give me more ads, show me things so uncannily accurate that I think my phone is listening to me. I love it, I’m a dirty little piggy for those ads. Oink, oink, bitch.

I want big daddy capitalism to rawdog my data.

Again, I should restate that you should absolutely not turn on tracking in iOS, especially not for Facebook or Instagram, and if you do, you’re a huge idiot. Let me explain.

In 2018, Facebook took out an ad in which Mark Zuckerberg said, “We have a responsibility to protect your information. If we can’t, we don’t deserve it.” Then just a few months later, a massive security flaw exposed millions of people’s photos. A few weeks ago, another data leak exposed phone numbers of over 500 million users. By its own metric, Facebook pretty clearly does not deserve our data. But it can have mine. However, do NOT do what I am doing, I beg you. Seriously.

As a datacuck, I just can’t help myself. I sometimes wonder if by allowing Facebook to track me across other apps I am giving it enough information to melt my face off in an apocalypse of targeted ads, just like the villains at the end of Raiders of the Lost Ark — IT’S BEAUTIFUL. (Although I guess in this metaphor I’m the Nazi, so I don’t love that; there’s enough of that on Facebook already.) Or I imagine I’m Prometheus chained to a rock, and Facebook is the massive eagle that pecks out my data liver every day.

I suppose I’m slighting the cuckolding community with this comparison (sorry cucks, hotwives, and bulls), because being a cuck isn’t really saying, “Fine, I give up, fuck my wife.” It’s usually on one or the other end of a spectrum: “Yikes! You’ve fucked my wife” or “Fuck my wife — please!” As for me, I’m just resigned to giving up my privacy to Facebook. After years of being extremely meticulous about my own data privacy, constantly checking my privacy settings, vigilantly removing and opting out, it’s a relief to just resign myself to a symbiotic relationship with a parasitic platform. I just want to give in and let it all wash over me like a nice warm sludge; Zuck the pain away.

What is Facebook if not a masochistic experiment to see just how much privacy we will fork over?

Now I know what it feels like to live on the edge, careening down a hill with no brakes. Yeah, I’ve got a Portal. No, I don’t cover the lens. You know what’s truly sick? I even enabled Facebook to use facial recognition on me to find photos I might be in that I’m not tagged in. In a truly pathetic cuck loser twist, it couldn’t even find any photos. (Again, I strongly recommend you absolutely do NOT do this.)

The sad reality about giving app data to Facebook is that it’s difficult to know what, exactly, you’re giving it. The word “privacy” on Facebook is a slippery concept. What Facebook means when it talks about giving people control over their privacy is largely the option to post just to friends and not publicly. Settings about who can see your photos and posts is one part of privacy, but it has little to do with the kind of data that you’re constantly sloughing off like dead skin cells. (Speaking of which, I’d gladly give Facebook my DNA. Come get it.)

That’s the mysterious layer of your data used for targeted advertising — personal information you weren’t aware you’d given up, like your income range, education level, parental status, race, or what kind of phone or computer you use. This information is all used for ads, traded around by data brokers in a way that is largely out of sight and yet is absolutely everywhere

Facebook has taken some steps to be more transparent about how the data it collects is used for advertising. But for anyone who doesn’t work in digital marketing or ad tech, it’s difficult to understand. It’s even embarrassingly hard for US senators to remember that no, Facebook doesn’t “sell your data,” and that they will own you if you suggest they do (ahem, Jon Ossoff). It’s sometimes easy to forget that the behemoth ad machine gorging itself on our data and shitting out targeted ads isn’t entirely benign until you see reports about how it has allowed ads for militias.

But Facebook does so many harmful things that its user data-based ad business isn’t even really the target of more serious criticism of the platform: hate speech, anti-vaxxers, disinformation. Its failure to stop the proliferation of extremism in groups that led to the “Stop the Steal” movement and the Capitol riots of Jan. 6. Political speech hashtags being stifled in India. Facebook’s enabling of genocide in Myanmar. These are the deep and deadly problems about Facebook that should make you angry.

Compared to that, what’s a little ad data between me and a monopolistic multibillion-dollar corporation? After all, what is Facebook if not a masochistic experiment to see just how much privacy we will fork over in exchange for seeing just how much privacy our friends will fork over? I’m going to be a shrinking violet with my data all of a sudden now that Apple is offering to stop tracking?

Oooh wittle baby do you think that big daddy Tim Awpple is going to save you from big meanie Zucky?

I’ve been fully Facebook-pilled into accepting my fate and letting it happen. I’m a total privacycuck, and I’m no longer ashamed to admit it.

But seriously, do not do what I’m doing. Use the iOS to opt out. Be smart.