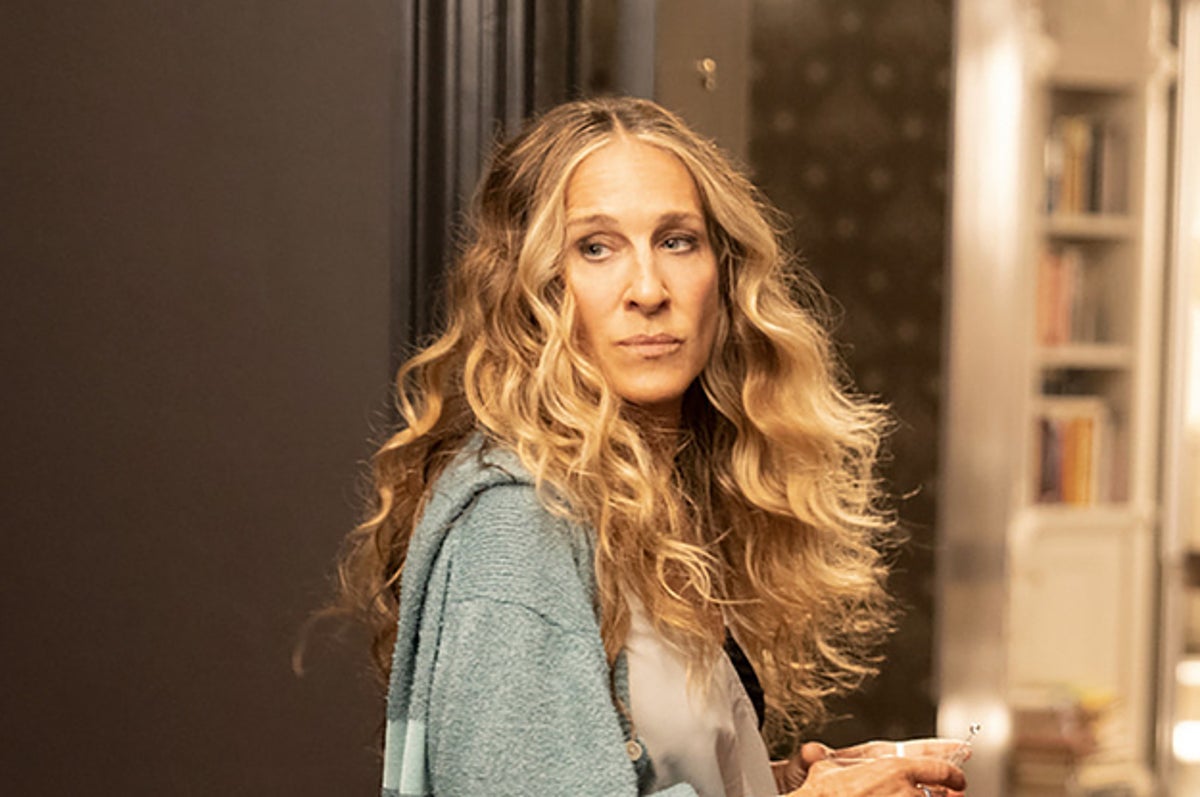 Even if you haven’t yet watched the Sex and the City reboot on HBO, And Just Like That…, you might have heard that people have a few *issues* with some of the plot points.

However, one thing really has people screaming at the screen, or at least venting on Twitter: when a major, beloved character has a heart-related emergency. In the scene, Carrie’s husband, John, aka Big (Chris Noth), has a heart attack and, as Carrie’s voiceover tells us, “Just like that, Big died.”

People weren’t happy with that development because, you know, why can’t we have nice things — like a loving marriage between middle-aged characters that lasts longer than five minutes? However, it’s only two episodes into the season. Maybe they’re setting us up for Carrie to start dating again? If I can withstand the cringe, I for one would love to see how she navigates Tinder. But I digress.

Here’s how Big’s heart attack happens: After puffing on a cigar (as one does, before exercising), he climbs on a Peloton to have a vigorous workout led by Allegra, portrayed by real-life Peloton instructor Jess King.

After his spin class ends, he walks to the shower, drops his phone, and collapses. Carrie comes home and stands dumbstruck, before rushing to cradle his head and call his name. He looks at her and weakly moves his arms, unable to speak.

Carrie calls Miranda, who shows up at her apartment just as they are zipping up the body bag, so presumably someone called 911 at some point. To be fair, no one really knows how they would react in any given emergency, which is by definition scary and unexpected. And of course, the writers have to create what makes sense for the scene and upcoming events.

However, there are a few other things Carrie could have done that might have helped Big potentially survive a heart attack — that is, if this were a real-life situation instead of the machinations of a writer trying to move the plot forward.

We talked to Dr. Donald Lloyd-Jones, president of the American Heart Association and a cardiologist at Northwestern University Feinberg School of Medicine, to find out what real humans should do when someone seems to be having a heart attack.

Try to stay calm: If someone has collapsed with a possible heart-related emergency, Lloyd-Jones recommends that you take a deep breath and do “what we talk about in medicine, which is to take your own pulse.” Take a few seconds to “understand that this could be an emergency, and you are that person that individual, that victim, is relying on.”

“I think it’s very important for people to take that breath, assess the situation, and if at all possible, not freak out, and really do everything they can to potentially save that person’s life,” he said.

Call 911: If the person is unresponsive, call 911. If they need CPR (more on that later), start that immediately and have someone else call 911. However, get that call in ASAP.

Assess the situation: Is the person still conscious as Big seemed to be in the episode? A heart attack — when a blockage or other problem reduces blood flow to the heart muscle — can cause incredible crushing pain in the chest or arm, particularly in the left arm. (Big rubs his arm before collapsing, so a possible clue here.)

Big is having a classic “TV heart attack” but in real life, it can cause fatigue, back pain, shortness of breath, nausea, dizziness, and other things you wouldn’t normally classify as “chest pain.”

“Symptoms can come in a lot of shapes and sizes,” Lloyd-Jones said. Keep in mind that heart attack symptoms can be subtle, particularly in women.

Again, time is of the essence here, whether it’s a stroke, heart attack, or something else. Call 911, and don’t try to drive yourself or someone else to the emergency room.

Check their ABCs: If the person is unconscious, you should check their ABCs, Lloyd-Jones said, another acronym that stands for airway, breathing, and circulation.

If their airway seems to be open and they aren’t breathing, check their pulse by putting two fingers (but not your thumb; it has its own pulse) on the side of the neck, wrist, top of the foot, or inside the elbows.

That means you need to do CPR, which can manually help move the blood to the person’s brain and other major organs, helping them to survive until someone with a defibrillator can shock the heart back into a normal rhythm.

Big was apparently still conscious — meaning his heart was still beating — when Carrie found him, so there was no need for her to do CPR. (Although he would be at risk for going into cardiac arrest.)

However, she should have called 911 immediately and, when he became unresponsive, checked his ABCs and started CPR.

Give them medication, maybe? So this part is tricky. Earlier in the And Just Like That… premiere, the characters mentioned that Big was taking nitroglycerin, a medication used for heart disease–related chest pain.

So, Carrie should have given Big his nitroglycerin, right? Not so fast. if he had recently taken an erectile dysfunction drug like Viagra or Cialis, nitroglycerin could be life threatening, Lloyd-Jones said.

“I​f they have taken a drug for erectile dysfunction in the last 24 hours, nitroglycerin could kill them,” he said. “We’re talking about Sex and the City, so it probably is a reasonable thing to mention.”

About 15% of strokes are caused by bleeding in the brain, and taking aspirin could make it worse. It’s perfectly fine to skip any medication until emergency workers can assess the person themselves, Lloyd-Jones said.

Giving someone medication “requires a little bit of decision making,” he said. “It’s OK to wait.”

Start CPR: If the person needs it, start CPR immediately, even if you are not 100% sure how to do it correctly. That involves pushing hard and fast on someone’s chest in what’s called hands-only CPR.

Medical experts and people who are trained often do chest compressions and mouth-to-mouth breathing in a 30:2 ratio, but hands-only CPR can still double or triple the chance of survival.

Place your hands one over the other on a person’s chest and press down at least 2 inches about 100–120 times per minute. If you’re stressed it can be hard to count, but if you match the beat to classic songs like “Stayin’ Alive” by the Bee Gees or “Work It” by Missy Elliot, you’ll have the right rhythm. (There is an entire Spotify playlist for CPR songs created by NewYork-Presbyterian hospital.)

“Seconds and minutes matter,” Lloyd-Jones said. “While the emergency medical system is responding, if people can begin CPR even just by pressing hard and fast on the center of someone’s chest, if they are unresponsive and they don’t have a pulse, you can save someone’s life.”

Try using an AED: If you’re not by yourself, ask someone to see if they can find an automated external defibrillator, or AED, which is a portable and user-friendly version of the same defibrillators used by doctors when they yell “Clear!” in TV shows.

They are found in airports, gyms, shopping malls, and even possibly fancy apartments like the one Big and Carrie live in.

You can even buy them yourself. Here’s an AED you can buy on Amazon.

By following simple instructions, you can use an AED to shock someone’s heart back into a normal rhythm before an ambulance arrives. However, if you are alone, don’t stop CPR to go look for an AED.

If you live with someone who has a heart problem, knowing how to do CPR or how to use an AED (or where one is located) is important, Lloyd-Jones said.

Here are a few more tips we can take away from And Just Like That...: