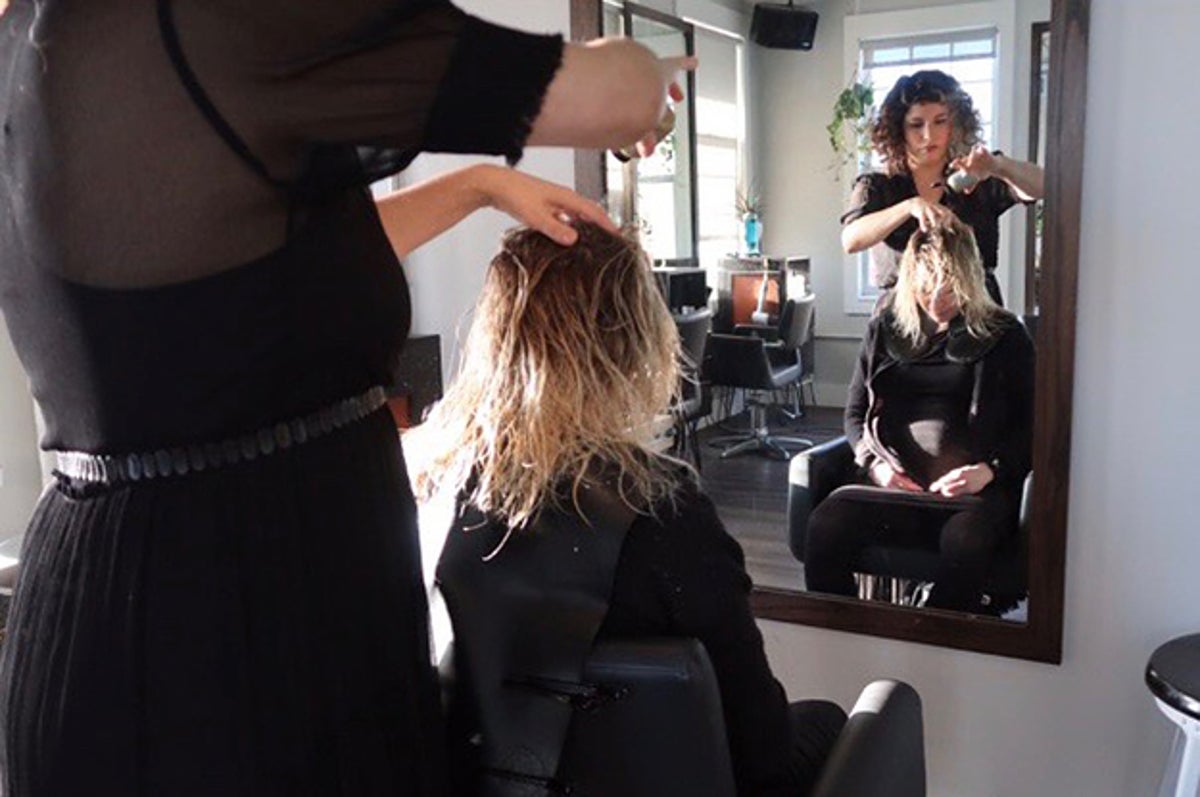 BuzzFeed News has reporters across five continents bringing you trustworthy stories about the impact of the coronavirus. To help keep this news free, become a member and sign up for our newsletter, Outbreak Today.

Since closing the California hair salon she runs with her brother almost two months ago, Margeaux Hamrock has found herself in an unfamiliar situation.

With no income or unemployment benefits and minimal government assistance, Hamrock, 31, has relied on gift certificates and donations from clients and friends to cover her rent, pay the bills, and buy groceries during the coronavirus pandemic.

“They’ve completely bridged the gap for me,” Hamrock, co-owner of Salon Wire in Long Beach, told BuzzFeed News. “But, at some point, you want that to end as well. I don’t feel it is the responsibility of my clients to make sure I have a roof over my head by not doing their hair.”

Now, after struggling to get loans and unemployment benefits to keep themselves and their businesses afloat, the Hamrocks and other personal care workers across the country have come together as part of a new advocacy group called the Beauty Coalition to petition state and federal leaders to bail out the beauty industry as they grapple with the challenges and risks of going back to work.

“I want to see them considering the beauty industry as a real industry worth saving,” said Mercedes Ortiz-Olivieri, a salon owner in Washington, DC, and a member of the coalition.

In the weeks since they were forced to stop working, many stylists have had difficulty obtaining loans and unemployment due to their unconventional business models and overwhelmed benefits websites that have seen unprecedented demand amid the crisis.

Hamrock said she received the $1,200 stimulus check provided to all Americans who make up to $75,000 per year under the CARES Act, as well as a $1,000 Small Business Administration grant for the salon. But that’s it.

“That’s a fraction of one month’s overhead,” said Hamrock, referring to the SBA grant.

Hamrock applied for California’s new pandemic assistance program for business owners and independent contractors like herself who don’t qualify for normal unemployment but hasn’t received any money through that yet.

“I’ve applied for, as you can imagine, any possible avenues to get the [Paycheck Protection Program (PPP) loan] or any of the loans at the low interest rates that the lenders are offering them at,” she said, “but…we haven’t either heard back or qualified for any of them.”

Kate Kent, a salon owner in Milwaukee, applied for PPP, the small business loan program funded by the CARES Act, and other grant and loan programs.

So far, Kent, 39, who is self-employed and employs 14 other stylists, has only received a $10,000 small business grant that she’s saving to help pay her stylists whenever they reopen, even though that’s a fraction of one month’s payroll. She questioned whether the PPP program provided much value to salons right now, given that in order for the loans to be forgiven, borrowers need to use 75% of the money for payroll and keep employees on payroll for eight weeks.

“It just still feels a little bit unclear how we can use those funds appropriately and still have it be forgiven,” Kent said. “To take on a loan with terms that are really unclear and could be potentially really harmful for my business in the future is just really unsettling.”

Reopening during the pandemic means fewer stylists can work at the same time and serve fewer clients each day. Salons’ overhead costs will also increase due to the added expense of acquiring masks and other supplies they need to create the safest workplace possible.

“Under these guidelines that people are having to work under, there’s no way you can be nearly as productive as you need to be to even cover your overhead let alone turn a profit so that you can carry on with your life,” Hamrock said.

In sharing their frustrations with others in the industry, Hamrock and her brother Chris found they weren’t alone in feeling nervous about returning to their salons without reliable access to financial assistance to help cover the costs of reopening and expected shortfalls in revenue.

So Ortiz-Olivieri, the DC salon owner, organized an April 29 call on Zoom with the Hamrocks and other stylists to talk about ideas about how to reopen in the safest way possible.

“I realized I was having the same conversation with several different salon owners about safety protocols and business practices,” said Ortiz-Olivieri, 43. “We don’t want to be in a hurry to open, but we understand that people are being put in positions where they’re literally choosing between their safety and paying their bills.”

It was on that call that the Hamrocks mentioned that they were working on a petition calling for a government bailout of the industry, causing the conversation to shift to what action they could take collectively to speak up for the industry. Through those discussions, the Beauty Coalition was born.

As of Wednesday, roughly 16,000 people have signed the petition, which asks for assistance for workers in states that are allowing salons to reopen now and those in jurisdictions where they may not be permitted to go back to work for months — whether the workers themselves choose to start working again or not.

Either way, hairstylists and salon owners say they need the government’s help to survive.

While officials in more than a dozen states have allowed salons to reopen, leaders in other states, such as California and New York, have said it won’t be safe to resume haircuts, manicures, and other personal services until the number of new COVID-19 cases declines drastically due to the close proximity between clients and workers in these businesses.

In states where salons are expected to be closed for longer, hairstylists say they face months of lost income and could lose their businesses if they can’t keep up with their rent and other ongoing expenses.

“I don’t think we should be forced to choose between risking our health to feed our families or staying safe and losing our businesses, because the reality of it is most salons can’t survive months without income,” Alyssa Jones, a salon owner in San Diego, told BuzzFeed News. “It’s just not sustainable to survive without any additional assistance or rent freezes.”

For workers who feel it’s too soon to open salons but are in states where officials have allowed them to get back to work, they may not have much of a choice to resist.

After petitioning Texas Gov. Greg Abbott to move personal service providers into the later reopening phases, Beau Bollinger said he may have to open his hair salon in Dallas anyway.

“I can’t go to my landlord and say, ‘Hey, I can’t pay rent because we’re not allowed to be open.’ Now I have to go to my landlord and say, ‘Hey, we can’t pay rent because I don’t feel like it’s safe for us to be open,’ and that’s a much different conversation,” Bollinger, 37, told BuzzFeed News. “What I’m trying to do is navigate the best way and the best time to do that so that we don’t lose our business and also so that the health and wellbeing of our staff and our clients are maintained.”

In addition to financial assistance, Bollinger said he’d like to see government officials step in to help small business owners and their commercial landlords navigate their leases during the economic downturn.

“We fail and also the landlords fail because now they don’t have tenants and it’s not like we have a booming economy where people are rushing in to rent new spaces so we’ve got to figure out a way that we can create an open dialogue about what works for all the parties involved,” he said.

Hairstylists who spoke to BuzzFeed News about the bailout said they’re not sure how much money they will need to save their businesses, but said if anything they’d like to see their industry get more attention by the government to ensure that they can qualify for and access whatever financial assistance is available.

“It’s really hard to say this is what I would need to survive. I really don’t know,” Ortiz-Olivieri said. “We would need help covering expenses for PPE and our overhead and our losses because we have to operate at a very reduced volume and capacity.”

Still, some doubt that government officials will even give the idea any consideration, even though haircuts have been used as a political plea by protesters to reopen their local economies.

Last week, a salon owner in Texas was ordered jailed after refusing to temporarily close her business during stay-at-home orders, actions that the judge who sentenced her described as “selfish.” In her response, the owner, Shelley Luther, who was ultimately released after Abbott stepped in, said she was keeping her salon open to feed her family.

In interviews about the situation, Luther admitted that shortly before she was taken into custody she received a PPP loan, but said she didn’t know how to spend it, given that the stylists who work at her salon are not actually her employees.

If anything, the petition has galvanized hairstylists to come together and speak up for their industry, giving them hope that they’ll be stronger on the other side.

“Although this is a really shitty situation and although it looks a little ugly even for the next several months, I’m very confident that through dialogue and through these conversations, through some of the work that the Beauty Coalition is doing … our industry is going to come out of this better than it was when we went into it,” Bollinger said.