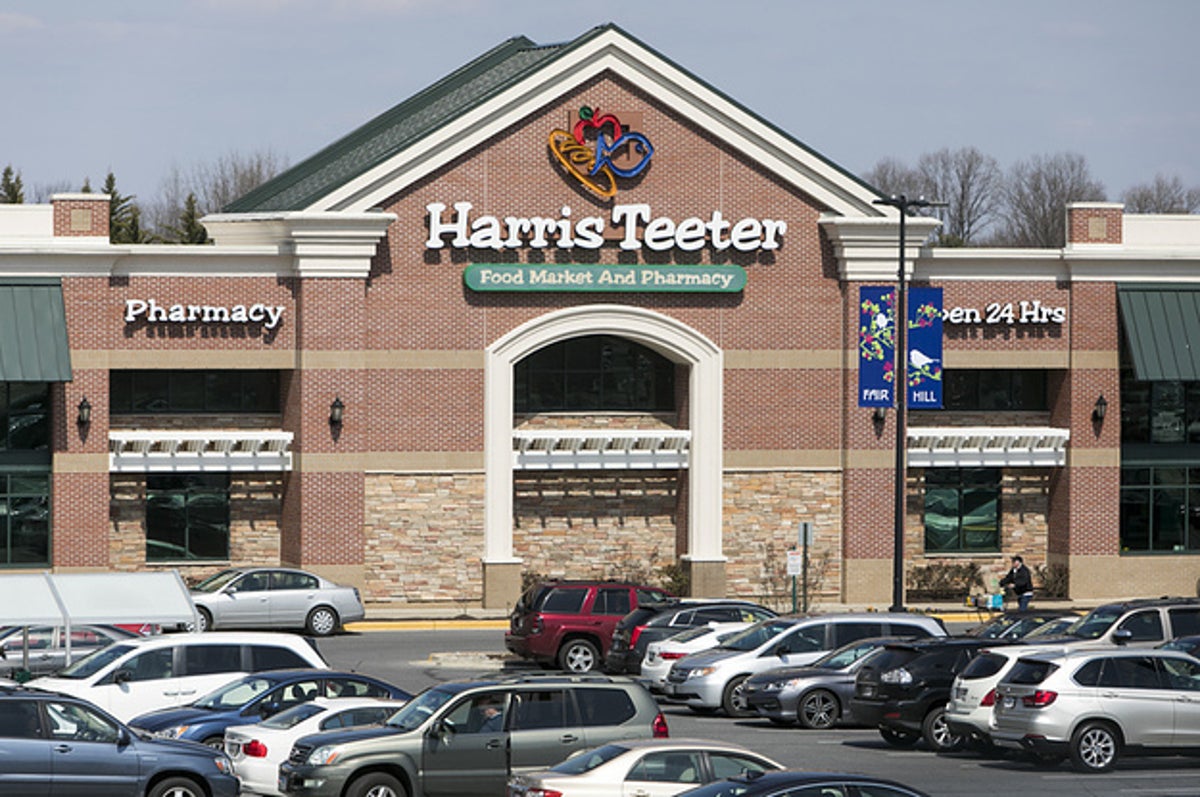 Employees at grocery stores in the South are getting their temperatures checked when they start work as part of new coronavirus health screening, except they aren’t allowed to know what the thermometer says, raising concerns about transparency and how their personal information could be used against them.

Ten workers across the southeast for the chain Harris Teeter told BuzzFeed News that managers refused to tell them their temperature after it was taken, even when they asked for it, making them nervous and uncomfortable with the new mandatory protocols. The employees asked to remain anonymous out of fear of retaliation.

“It was a serious red flag to me because it’s about the sovereignty of my body and, in my opinion, is a medical examination and I should be able to know that information,” an associate in the Charlotte area told BuzzFeed News. “It puts us at risk of abuse, in my opinion.”

At a Harris Teeter store in the Charlotte area, two employees said having their supervisors read and then refuse to share their temperatures felt the information could be used against them. One office assistant pointed to a hypothetical situation in which an employee had a high temperature, but “managers would ignore it because it’s a busy day.”

A manager at a Virginia location shared similar concerns, explaining that it stifled an employee’s right to know about their own health.

“The biggest problem, in my eyes, is that without telling associates what their temperatures were, and having a set cap on what temperature is and is not acceptable to work with, there is a very real possibility that associates are coming in, testing with a fever of 100.2, and being told to work,” he said. “With that information, each associate could make an informed decision on their own, but that information is not being given.”

On May 6, Harris Teeter, headquartered in Matthews, North Carolina, started mandating temperature checks at the start of every shift for employees across its 230 stores. Like many other retailers, the grocery store chain is now conducting thermal screenings to ensure workers are not coming in sick and making them answer other questions about their health. Before the coronavirus, such health tests would not be allowed, but the Equal Employment Opportunity Commission (EEOC) said that in such unprecedented circumstances, when COVID-19 poses a “direct threat” to the workplace, the examinations are considered “job-related.”

Before they start their shifts, workers told BuzzFeed News they go into a private room in their store, where a manager then scans their temperature with an infrared, thermal thermometer, checks it, and tells them it’s “good” or “high” or “low” before sending them off.

If someone has a temperature of 100.4 degrees or higher, they’re asked to go home, see a doctor, and will be paid for that day, a Harris Teeter spokesperson told BuzzFeed News.

Some associates, though, want to know what temperature is and have grown concerned after managers have refused to divulge the information.

At Harris Teeter’s large distribution center in Greensboro, North Carolina, where several workers have tested positive for COVID-19, a night picker said he was frustrated that he was getting little to no information during his health screenings, especially when he still works in close quarters with others who are scrambling to fill a constant onslaught of orders.

“They don’t give us any information on it. They don’t tell us anything,” he said. “It feels like I should be allowed to know, since you still have 10 people in a 3-foot-wide hallway trying to grab stuff and complete our picks as fast as we can.”

In some instances, workers say managers cited the Health Insurance Portability and Accountability Act (HIPAA) as a reason that they could not share the temperature reading, creating even more confusion. Other workers said they were told it would be “breaking the rules,” though they said they were not told which “rules” and why hearing their own vitals would be an issue, given that the screenings are done in private.

In a statement to BuzzFeed News, Harris Teeter said it is “not aware of any law that would prohibit managers from telling associates their temperature” and are not doing so with the intention to “keep important information from associates.”

“We choose not to do so as we want to get associates through the thermal screening process as quickly as possible and into work, and because we are not medical professionals and do not want to give medical advice,” Danna Robinson, a company spokesperson, said in an email. “Any associate with a high temperature is told that and urged to seek medical attention.”

“We do not report temperatures to our associates, and we do not keep records of associate temperatures, as these would be medical records and there are legal requirements governing how medical records must be maintained,” Robinson said. “This would impose additional obligations on our frontline associates.”

However, according to the federal government and labor experts, they are.

“Generally, measuring an employee’s body temperature is a medical examination,” the EEOC said in its updated pandemic preparedness guidelines. “As with all medical information, the fact that an employee had a fever or other symptoms would be subject to ADA confidentiality requirements.”

“And if a company is saying they aren’t medical, they’re incorrect,” he added.

And while the ADA does not require companies to tell employees the results of their medical exams, he called the policy “baffling,” adding that he had never heard of a company refusing to do so.

“I’ve never heard of an employer doing something like this, taking a medical exam, and not being willing to tell an employee their results,” he said. “It is there own personal information and I am not sure why they wouldn’t want to?”

Across the US, essential businesses are instituting temperature checks and health screenings in “wildly different ways,” Fram pointed out, yielding varied results.

For example, the Kroger Company, the largest US grocery chain, owns Harris Teeter and several other well-known supermarket retailers, like Ralph’s and Food 4 Less. In interviews with BuzzFeed News, Kroger workers shared how the temperature checks not only varied from store to store, but also with whichever supervisor was in charge that day.

Some stores still weren’t taking temperatures at all, employees said. A Harris Teeter associate in Florida said she had not had her temperature checked once, despite an email, which BuzzFeed News obtained, that was sent to managers on May 1 highlighting the May 6 start date, as well as directives to complete some training modules.

A worker at a Smith’s Foods in Utah said their checks were sporadic. A bagger at a store in the Midwest said their process “was super lax” and was “happening in the middle of the damn floral department.” At a Kroger in Knoxville, Tennessee, one employee said their checks were not done in private and shift leads were writing down people’s temperatures “on a clipboard with everyone’s name printed out on it.”

“I was not aware there would be a log of our temps until they started taking them,” the employee said. “I don’t mind them writing my temp down, but it does bother me that I can’t see what number they are writing and that we do not initial our temp.”

Recording temperatures and other medical information at work because of the pandemic is a murky, evolving issue that could breach employee privacy laws, depending on the state, legal experts say, and should be treated seriously.

“That’s confidential medical information and cannot be disclosed except in very specific circumstances,” Fram said. “An employer has to keep that log in a locked medical file. You can’t just have that in a file cabinet or lying around, that’s where it gets dangerous.”

In most cases, Kroger workers told BuzzFeed News that their temperature readings were all over the place and laughably inaccurate, with some being so low that, as one recently hired worker in the midwest joked: “You’d be showing up every day and failing to register as alive would be a concern.”

“My temp was 93.7 the first day and 95.6 today. My friend’s temp was 88,” another worker in Tennessee told BuzzFeed News. “It’s pretty much a joke at my store that we are considered dead on arrival because our temps are scanning so low.”

Like many other major food-service businesses, Kroger faced criticism for its delayed efforts to protect workers during the coronavirus crisis. About 10 employees have died nationwide, the company said, five of whom were in the Detroit metro area. And workers are still getting sick.

At a Ralph’s in Los Angeles, 21 of 158 employees have tested positive for COVID-19, making it the largest cluster of infections at a retail store that the county’s health department has recorded so far, the Los Angeles Times reported. Two Ralph’s workers in the LA area have also died from the virus, the United Food and Commercial Workers Union told BuzzFeed News on Friday.

In Denver, A longtime King Scooper’s employee named Randy Narvaez died after testing positive for the virus in early May, Kroger confirmed to CBS 4 Denver. In total, there are 12 known cases of COVID-19 among the store’s 166 associates, according to the company.

Kroger has not responded to multiple requests from BuzzFeed News about the number of associates who have died across the US.

On May 4, the company announced that it was expanding free COVID-19 testing for frontline associates, with hopes of it being in all 50 states by the end of May. Like other retailers, it had also instituted social distancing measures and has been supplying employees with masks.

But Kroger is also ending its $2-an-hour “hero pay” raise for its nearly 460,000 workers on May 16, despite the fact that many states are still under stay-at-home orders and coronavirus cases in many communities continue to rise. At the same time, the company disclosed in an SEC filing on Tuesday that its CEO, Rodney McMullen, got a roughly $2.5 million (21%) raise as part of his 2019 compensation package.

After backlash from UFCW International and workers, the company said it would give its qualified, full-time workers a one-time $400 bonus and $200 to part-time associates, paid in two installments.

In a letter to Kroger executives, a group of Michigan lawmakers called the move “a slap in the face,” writing that “if Kroger can afford to pay its CEO $21.1 million in 2019, Kroger can continue to pay the workers who are the lifeblood of the company an additional $2 per hour.”

Nearly every Kroger and Harris Teeter employee brought up losing their pay bump in interviews, describing it as “messed up” and signaling that the company was moving back to “business as usual,” regardless of the ongoing danger they face coming into work every day.

“Everything’s going back to ‘normal,’ but no one is less at risk,” a Harris Teeter employee in Florida said. “The pay should not stop until the hazards and requirements stop, like wearing a mask. But I guess heroes don’t wear masks.”