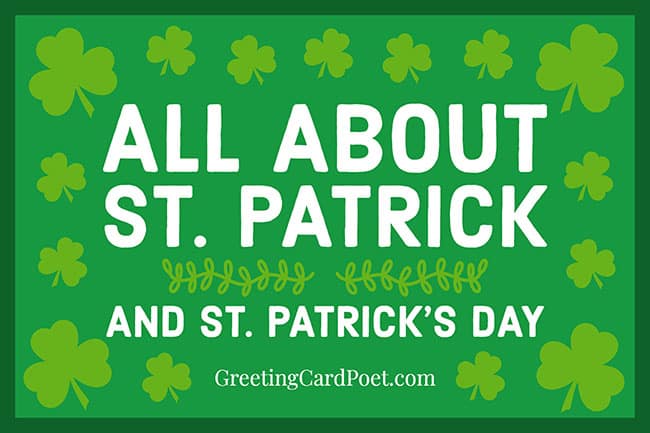 Many of us celebrate St. Patrick’s Day, but not many folks know about the St. Patrick and the origin of the holiday.

Originating in Ireland, Saint Patrick‘s Day is celebrated annually in the country and throughout the world. Perhaps Irish-Americans in the U.S. have elevated the holiday to a different level with parades, parties, and the dyeing of rivers and bodies of water green in celebration.

To know more about St. Patrick and his day, we must learn about his background. And, to think, the patron saint of Ireland is a Roman Brit. Read on to find out more.

Who was St. Patrick?

He was a Romano-British, Christian missionary and bishop from the fifth century in Ireland. An active missionary in Ireland at the time, he became known as the “Apostle of Ireland” and the “Enlightener of Ireland.” Patrick is regarded with great respect in the Catholic Church, Eastern Orthodox church, Anglican communion, and Lutheranism.

What was St. Patrick‘s birth name or real name?

When was St Patrick born?

Historians believe that he was born in AD 390.

Where was St Patrick born?

Saint Patrick was born in Roman Britain. While the exact location cannot be said with accuracy, some say it was England, while others also say Glannoventa, Scotland, and Wales.

His father’s name was Calphurnius, and his mother was Conchessa. They were both Romans residing in England. Based on this, it can be said that Saint Patrick‘s lineage was Italian.

What nationality was St. Patrick?

Based on his birthplace, St Patrick was British. It is something that may come as a surprise as most people assume that he was Irish, which he wasn’t. The understanding of that fact can be achieved upon learning more about his background.

What is St Patrick the patron saint of?

He is the patron saint of Ireland. Along with that, he is also a patron of Nigeria, Montserrat, Archdiocese of New York, Roman Catholic Archdiocese of Newark, Boston, Rolla, Missouri, Loíza, Puerto Rico, Murcia, Clan Giolla Phádraig, engineers, paralegals and Archdiocese of Melbourne.

What did St Patrick do?

He converted Ireland into Christianity in the fifth century.

What is St Patrick known for?

Although St Patrick‘s father was a deacon, Patrick was not a firm believer. When he was around 16, he was kidnapped by Irish pirates and taken away from his home in Britain to Ireland. There Patrick looked after sheep and other animals for six years before escaping.

During his time in captivity, he claimed to have come closer to God. Patrick explained that the Lord had mercy on his ignorance and youth and given him the opportunity to have his sins forgiven and convert to Christianity. There, he worked and prayed and built his relationship with God, developing his spirituality. He then switched to Christianity eventually.

After six years in captivity, he said he heard a voice that told him that he would go home soon. He was also said that he would go back more quickly and that the ship he would be needed was ready. So he fleed his master and went to the port to find a boat which he boarded to return home. He then continued to study Christianity.

A few years after returning home, he had a vision. In the vision, he had seen a man who he perceived to be Irish. The man’s name was Victorious, and he had many letters in his hand, one of which he gave to Patrick. The message had the heading “The Voice of the Irish.” He said that as he read the letter, he could hear the voice of the people calling out to him and saying, “We appeal to you, holy servant boy, to come and walk among us.”

Responding to this call, Patrick went back to Ireland as a Christian missionary. After that, he baptized thousands of people and ordained priests to lead the newly baptized Christians. Some of the people he had converted were wealthy women and sons of kings.

However, Patrick‘s preaching of Christianity in Ireland did not come without obstacles. He refused to accept gifts and presents from kings and other wealthy people. These actions put him at odds with them as they saw it as an act of rudeness.

What did he drive out of Ireland?

Legends say that he drove away snakes from Ireland. It credits the banishment of reptiles from the country to Patrick. However, this fact is viewed with skepticism by many, although perhaps the statement is used in more of a figurative sense.

What is the Saint Patrick Shamrock Story?

Legend has it that St. Patrick used the shamrock – a three-leaf young clover – to explain the Holy Trinity concept to Irish people. Shamrock plants grow wild throughout much of the Emerald Isle. The three leaves of the shamrock represent the Father, Son, and Holy Spirit. The tradition of wearing shamrocks on St. Patrick’s Day dates back to the early 1700s.

The St Patrick‘s Cathedral in Dublin, Ireland, was founded in 1191. It is the National Cathedral of the Church of Ireland. It is the tallest church in Ireland and the largest. The cathedral receives no state funding but still welcomes all into it. It hosts many public ceremonies of the nation in it.

The St Patrick‘s Cathedral in Manhattan, New York, is a Neo-Gothic decorated Roman Catholic cathedral that is considered a prominent landmark of the city. It is the largest decorated gothic-style cathedral in the United States. It was built in 1878.

Musical adaptations of it are:

The National Museum of Ireland in Dublin possesses a bell. It was a relic that was removed from his tomb 60 years after his death to be used as a relic. It was encased in a sort of “bell shrine,” which is an essential symbol of Viking-influenced, Celtic art. The bell, however, is simple in design. It was initially forged from iron but has since been coated with bronze. The bell is described as “The Bell of the Testaments.”

Some places that were named after him are:

The Confession of St Patrick

The Confession of St Patrick is a book written by St Patrick. It is an autobiographical book in which he details how he was taken away for slavery in Ireland when he was 16, experienced divine visions, and followed the instructions in the dreams to become a bishop and preach Christianity in Ireland ultimately.

Death of the Saint

When did St Patrick die?

St Patrick died on March 17, AD 461, after 40 years of living in poverty, traveling and teaching in Ireland.

How did St Patrick die?

He is said to have died in Saul, the place where he had built his first church.

Where was he buried?

He was buried in Downpatrick, in its cathedral.

What is St Patrick‘s Day?

The Feast of Saint Patrick or St Patrick‘s Day is a religious and cultural celebration.

When is St Patrick‘s Day?

Why do we celebrate St Patrick‘s Day?

March 17 is the date that St Patrick died. Hence the day is celebrated in honor of him as he is the patron saint of Ireland.

What to do on St Patrick‘s Day?

Traditionally, people celebrated St Patrick‘s Day by going to the church in the morning for prayers. They would then celebrate with food and drinks later in the day. However, there are much more activities and ways to celebrate the day:

.> Plan a Scavenger Hunt: Scavenger Hunt can be an excellent way to engage friends and family on Saint Patrick‘s day. It can be incredibly enjoyable and fun when done with loved ones.

.> Learn more about the Irish origins of Saint Patrick‘s day: It festival in many countries around the world. So it will be a good practice to know more about the background of the festival. We can also celebrate by learning more about Ireland as a country and its history. Check out the many online resources for this.

.> Try out Irish poetry: Listening to Irish poetry can be one of the activities. Ireland is a country from which a lot of well-known poets have emerged. So this can be a chance to gain a lot of valuable poetry knowledge.

.> Listen to Irish music: Music is always an excellent way to get engaged in different cultures. Irish music can be another option for becoming even more acquainted with the Irish culture.

Is St Patrick‘s Day a holiday?

Saint Patrick‘s day is a national holiday and a bank holiday in Ireland. However, it is not a federal holiday in the United States.

The color that was initially associated with St Patrick‘s Day was blue. One of the reasons why blue was replaced by green was because of Ireland’s nickname “The Emerald Isle.”

The tradition is based on the theory that leprechauns will pinch you if you don’t wear green. Other than that, during the rebellion of 1798 against the British, the Irish troubles wall green. This was to wear a color that would be symbolized against the trademark read of the British.

Traditional foods eaten on Saint Patrick‘s day that pays tribute to the Irish culture are:

Some of the deserts for Saint Patrick‘s day include:

Other than that, beer and other drinks stained in green are also consumed by the people celebrating Saint Patrick‘s day.

The first Saint Patrick‘s Day parade was held in New York City by Irish soldiers serving the British army to honor and celebrate the Irish festival. That took place in 1762.

Criticism of the Celebrations

Saint Patrick‘s Day celebrations in recent times haven’t escaped some derogatory behavior. Examples can include open drunkenness on the streets. While critics think the festivities have become too commercialized, straying from the festival’s purpose, which is the celebration of the saint and Ireland. Some people celebrate the day by wearing Leprechaun outfits.

Foreigners also appropriate Irish culture by claiming it and portraying stereotypical Irish portrayals. Other parts of the festival celebrations that receive criticism is the unwelcoming nature of it towards the LGBT community.

O’Halloran traces his family roots back to Galway, Ireland. He is the founder and editor of Greeting Card Poet.

Get Well Wishes To Encourage A Speedy Recovery
Menu for Holiday Greetings, Messages and Quotes