Facebook Says It Will Pause Ads For Gun Accessories After Complaints 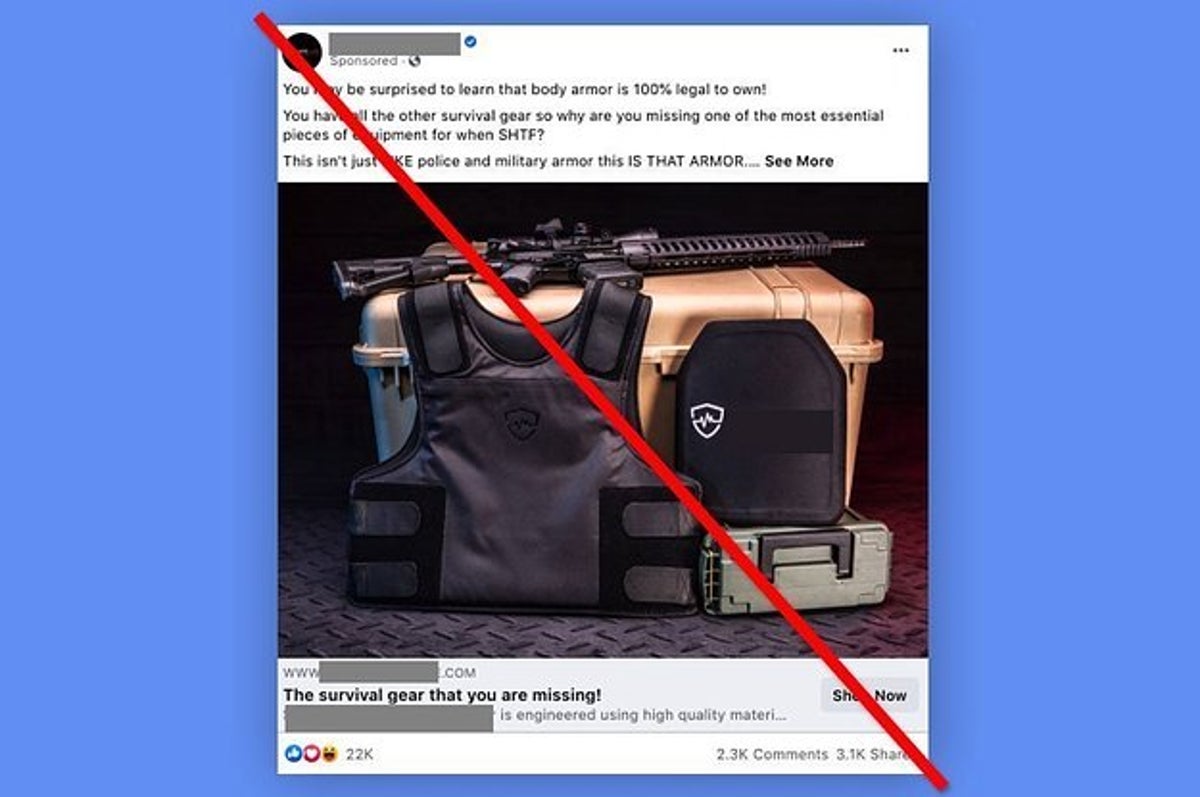 Following complaints from Senators and employees, Facebook on Saturday said it was temporarily halting ads for gun accessories and military gear in the US through next week’s inauguration of President-elect Joe Biden.

The move follows a BuzzFeed News story that revealed the world’s largest social network displayed ads for gun holsters, body armor, and other military-related paraphernalia in the News Feeds of people who had engaged with content about the attempted coup at the US Capitol building earlier this month.

“Out of an abundance of caution, we are temporarily banning ads promoting weapons accessories and protective equipment in the U.S. until at least January 22nd,” Facebook spokesperson Liz Bourgeois said. “We appreciate our employees, BuzzFeed’s reporting, and policymakers for raising this concern.”

On Sunday, following publication of this story, BuzzFeed News continued to find ads for military tactical gear and firearm accessories on the social network, more than 22 hours after Facebook announced its temporary suspension.

While Facebook already prohibited advertisements for guns, ammunition, and weapon enhancements like silencers, the company has still allowed ads for accessories including holsters and attachable flashlights and laser sights. Facebook users and employees noticed an uptick in ads for these products and military gear, including armored vests, on their News Feeds in the days following a riot at the Capitol that left five people dead.

Ads for tactical gear were also being shown to people who followed right-wing extremist pages or groups on the social network. Research from the Tech Transparency Project, a nonprofit industry watchdog group, showed that a Facebook account set up by the organization to follow pages belonging to militant and white nationalist organizations on Facebook was regularly served ads for military gear in between posts casting doubt on the presidential election and others praising the assault on the US Capitol.

Some of the ads played to the fears of Facebook’s users, asking them if they were adequately prepared for turmoil in the lead-up to Inauguration Day.

Following BuzzFeed News’ story about the ads, two sets of lawmakers and regulators wrote letters to Facebook on Friday. Sens. Tammy Duckworth, Richard Blumenthal, and Sherrod Brown excoriated Facebook for profiting during a time of civil unrest, and demanded that the company “immediately develop and execute a Facebook policy permanently prohibiting advertisements of products that a reasonable observer would interpret as primarily designed for use in lethal tactical operations and armed combat.”

“Facebook must hold itself accountable for how domestic enemies of the United States have used the company’s products and platform to further their own illicit aims,” they wrote. “Whether through negligence or with full knowledge, Facebook is placing profit ahead of our Nation’s democracy.”

In another letter, the attorneys general of Massachusetts, New Jersey, Illinois, and Washington, DC, asked that the company pause ads for the sale of weapons accessories and military gear.

Facebook, which faced internal criticism from employees about the ads before and after BuzzFeed News’ Wednesday story, ultimately conceded to the less onerous request from the attorneys general.

On Sunday, however, the ads persisted. BuzzFeed News found multiple instances of advertisements for gun holsters and armored vests.

“A 2021 new ammo experience,” the ad read, sandwiched between posts on the account’s News Feed promising a new American revolution.

McDonald’s, Chick-Fil-A, And Dunkin’ Are Keeping Their Dining Rooms Closed, Even As Some States Reopen
Australia Wants Facebook And Google To Pay News Outlets For Their Content. Could Governments Around The World Follow?