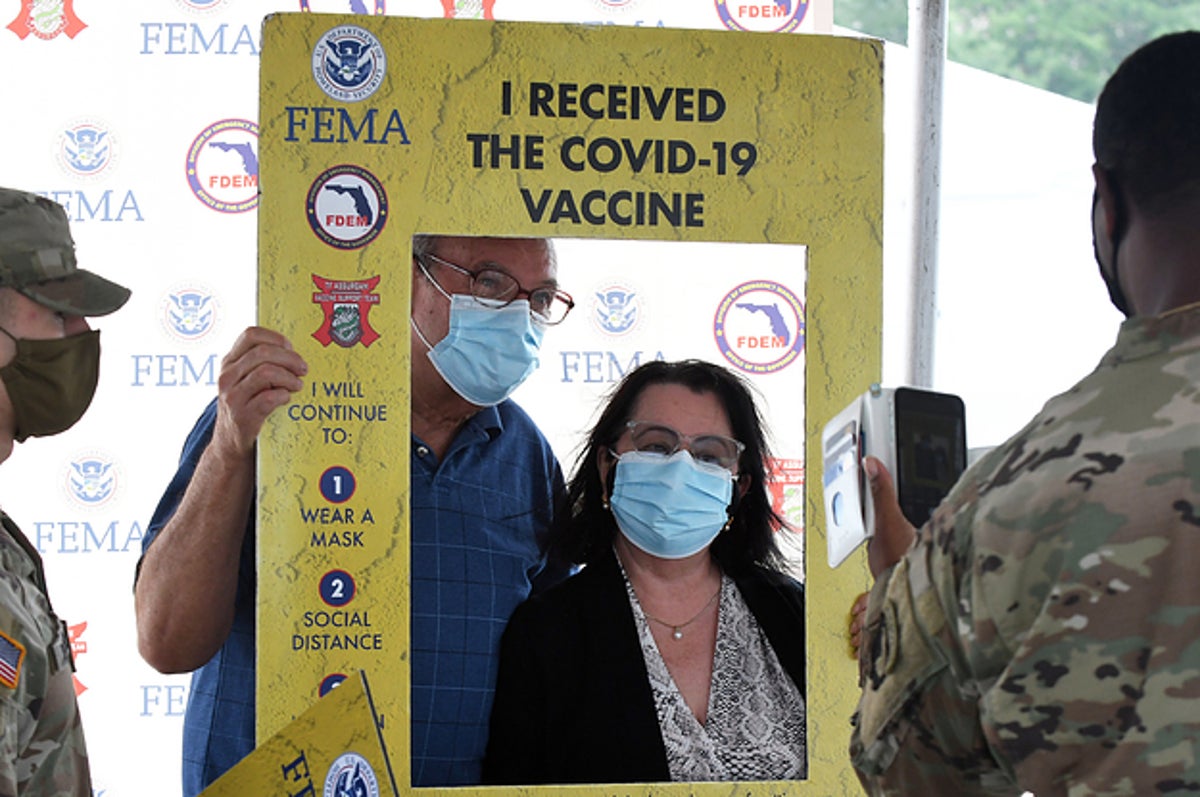 US health officials announced that most Americans should get a booster shot eight months after vaccination, as the Delta variant spreads rapidly across the US.

The Biden administration plans to offer booster shots to most vaccinated Americans starting in September amid concerns that immunity for those who were given their shots months ago is waning just as the more transmissible Delta variant is surging across the nation.

The joint announcement, released on Wednesday morning and signed by nearly every top health official in the federal government, was based on data collected in the US and worldwide about how long protection from the vaccines lasts. It stated that while the vaccines still currently provide strong protection against severe illness, hospitalizations, and deaths, that protection appears to decrease over time.

“Based on our latest assessment, the current protection against severe disease, hospitalization, and death could diminish in the months ahead, especially among those who are at higher risk or were vaccinated during the earlier phases of the vaccination rollout,” the statement said. “For that reason, we conclude that a booster shot will be needed to maximize vaccine-induced protection and prolong its durability.”

The decision was signed by officials including CDC Director Rochelle Walensky, acting FDA Commissioner Janet Woodcock, and National Institute of Allergy and Infectious Diseases Director Anthony Fauci. The move must still be approved by the FDA, which will have to evaluate additional data on the safety and efficacy of administering boosters.

The booster shot rollout will begin on Sept. 20 and will start with those who were vaccinated earliest in the campaign, including healthcare workers, nursing home residents, and other older adults who received the Pfizer or Moderna vaccine. Boosters will then roll out across other vaccinated groups starting eight months after an individual’s second dose.

The health officials also noted that people who received the one-dose Johnson & Johnson vaccine would likely need to get a booster but said they anticipated additional data in the next few weeks. A two-dose trial of Johnson & Johnson’s vaccine is expected to report data soon.

“Even though our vaccines are currently working well to prevent hospitalizations, we are seeing concerning evidence of waning vaccine effectiveness over time and against the Delta variant,” Walensky said at a White House COVID-19 briefing on Wednesday announcing the change. “Our plan is to protect the American people and to stay ahead of this virus.”

The new policy comes just one week after the FDA approved boosters for severely immunocompromised people and is a big departure from US health agencies’ prior stance on booster shots for the general population. A little more than a month ago, the FDA and the CDC dismissed the idea of additional shots in an unusual joint statement. “Americans who have been fully vaccinated do not need a booster shot at this time,” they wrote.

It also comes amid concerns about very low vaccination rates in countries across the world, which will lead to more deaths and the possible emergence of more dangerous variants. Many experts criticized the move for prioritizing additional doses across all groups in the US — rather than just those most vulnerable to severe COVID-19 complications — over unvaccinated people in other countries.

It’s unclear whether the scientific evidence justifies boosters for everyone who has been vaccinated, according to John Moore, a virologist at Weill Cornell Medical College in New York. “The reality is that relatively few people are getting seriously ill after vaccination,” he told BuzzFeed News. “The downside of this decision is that it can give the impression that the vaccines are failing.”

Experts have so far been unclear on whether “breakthrough infections” in vaccinated people are mostly due to immunity starting to wear off in those who received their shots early in the US vaccine rollout or if they show that current vaccines are less effective against Delta than other variants.

“That’s very hard to sort out because there’s two things going on at once,” Peter Hotez, a vaccine researcher at Baylor College of Medicine in Houston, told BuzzFeed News. What’s more, on May 1, the CDC stopped collecting comprehensive data on breakthrough cases that didn’t lead to hospitalizations or deaths, making it hard to know how frequently they are occurring.

Data from Maccabi Healthcare Services, a large Israeli HMO, shows that immunity from COVID vaccination does wane over time. People who were given their shots early in that nation’s rapid vaccine rollout were more likely to be infected than those vaccinated later on. This was true within age groups, suggesting that it wasn’t simply due to older people, who were prioritized for vaccination, being more vulnerable.

Studies in nations hit by Delta waves paint a confusing picture of whether vaccines are less effective at preventing infection with the Delta variant. According to slides presented at a CDC advisory committee meeting last week, Israel and Qatar have seen a big reduction in the Pfizer vaccine’s ability to prevent symptomatic infection with Delta compared to the previously dominant Alpha variant — with recorded efficacy dropping to just 41% in Israel. But in the UK and Canada, the vaccine still seems more than 85% efficient in preventing illness from Delta.

One possible explanation for these conflicting results is that the UK and Canada delivered their vaccine doses 12 weeks and 16 weeks apart, respectively, which seems to provoke a stronger immune response than the 3- to 4-week spacing used in Israel, Qatar, and the US.

Meanwhile, data from Qatar and a study from the Mayo Clinic in Rochester, Minnesota, suggests that the Moderna vaccine is holding up better against the Delta variant, with only small reductions in efficacy compared to its performance against Alpha.

The Biden administration’s move on booster shots comes at a tense moment in the drive to vaccinate the entire world. The World Health Organization recently called for a moratorium on booster shots in rich countries until more people in low-income countries receive their first shots. In many African nations, fewer less than 3% of people are fully vaccinated.

Lagging vaccination across the developing world could come back to haunt the US and other rich countries, experts warn. According to a study from the Baltimore-based biotech company Auxergen, the Delta variant is mutating more rapidly in countries with lower rates of vaccination. That increases the chance that new, even more dangerous variants will emerge and spread across the world.

In a press conference on Wednesday, WHO leaders criticized the decision to roll out boosters. “What is clear is that it’s critical to get first shots into arms and protect the most vulnerable before boosters are rolled out,” said WHO Director-General Tedros Adhanom Ghebreyesus, citing a meeting the group convened last week with 2,000 experts to debate the available data on additional shots. “The virus is evolving and it is not in the best interest of leaders just to focus on narrow nationalistic goals,” Tedros added.

Mike Ryan, executive director of the WHO’s Health Emergencies Program, condemned the move in even more stark terms: “We’re planning to hand out extra life jackets to people who already have life jackets, while we’re leaving other people to drown without a single life jacket. That’s the reality.”

This story has been updated to include comments from virologist John Moore.

This story has been updated to include information from Wednesday’s White House COVID-19 briefing and the WHO press conference.

We Don't Have An Explanation, But This Ice Cream Quiz Weirdly Knows Your Exact Relationship History
Supreme Court Conservatives Skeptical Of Gun Restrictions