Christmas around the World | Traditions 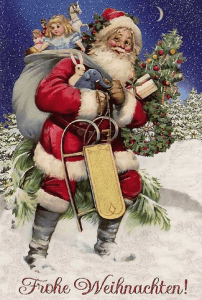 Do you ever wonder how folks celebrate Christmas around the world?

Christmas is, without a doubt, the most celebrated festival of all. Interestingly, its reach is so widespread that unlike the big festivals of other religions, it is celebrated in almost all countries.

What makes it even more interesting is that different countries can have unique customs and traditions even though they are centered on the main theme of Christmas Eve, the Christmas Tree, Santa Claus, and Christmas gifts and greetings.

Let’s explore how this beautiful and lively occasion is celebrated in unique ways in different countries.

The Great Christmas Traditions around the World

There are many Christmas traditions which originated in the UK – and some which are unique to this country. Wassailing and Boxing Day are two such old customs. While The Christmas Meal is a dinner in the United States and many other countries, it is taken at lunch in the UK. Roast turkey and vegetables are the main servings on the menu. Roast beef and goose were popular in the old days. But Brussels sprouts are an integral part of the meal.

Ireland Christmas around the world

Ireland has always been known for its unique, often bizarre, traditions. On Christmas or Nollaig, the Irish folks will place a large candle on the sill of a large window on Christmas Eve. They will keep the candle lighted throughout the night to welcome Mary and Joseph. People go around wishing each other Nollaig Shona (Merry Christmas).

The day after Nollaig, they celebrate St. Stephen’s Day with the custom of Wren Boys Procession. The procession involves young men and women dressing up in homemade costumes, carrying a holly bush at the end of a long pole and singing a rhyme on wren bird.

The world recognizes Christmas with winter and snow. Australia recognizes it with the hottest time of the year – there’s no snow on Christmas here. Carols by Candlelight services are unique to the country, with many local bands, choirs, and even celebrity singers joining the troupes. Unlike in the West, the carol songs here don’t have words about winter and snow.

Australia also has the tradition of Santa Claus and gift-giving, but when in Oz, he rides on kangaroos. At the same time, he also has to change his clothes to adjust to the hot Australian Christmas. You might like Funny Holiday Quotes.

Austria and Germany Christmas around the world

Both Austria and Germany have many similarities in how Weihnachten is celebrated. Merry Christmas is pronounced as Frohe Weihnachten in German. In Austria, it is believed that Christkind is the one who decorates the Christmas tree and brings kids presents. In local tradition, Christkind is a baby symbolizing newborn Christ. She has wings and golden hair.

In Nurnberg, in Germany, a parade takes place every Weihnachten and a young girl is selected to dress up and participate as the Christkind. She will have a long gold/white dress, blond and curly hair, a gold crown, and wings of an angel.

The Ski Jumping Four Hills Tournament is also associated with a Christmas celebration in Austria and Germany.

Venezuela — Christmas around the world

Caracas, Venezuela has a unique way of celebrating Christmas – skating to mass. For an entire week before Christmas Eve, the streets of the city are closed for the Early Morning Mass where everyone skates to mass. No other traffic is allowed during this time. On Christmas people wish Feliz Navidad to each other.

Italians wish Merry Christmas as Buon Natale. The Christmas Witch is an integral part of Italian Christmas. It is not the Santa who brings gifts to kids here – it is a witch. Locally known as La Befana, the witch is an old woman who rides on a broomstick. The belief is that she’s covered in soot because she enters and leaves through chimneys. Kids would leave food and wine out for her, just like milk and cookies are left for Santa.

Norway — Christmas around the world

Even Norway has its witch and broom belief in Christmas. In this Scandinavian country, there is a tradition of hiding brooms on Christmas Eve. The locals believe that otherwise the evil spirits and witches will come out of the graves and fly around on the brooms. Norwegians wish each other by calling ‘God Jul’.

Mexicans have an entirely different way of celebrating Christmas. They have figures carved in radish lining and lined along the central plaza in big towns 2 days before Christmas Eve. It is a colorful celebration with dancers, conquistadors, mythological/historical figures and events being carved in radishes and placed all around. It is known as the ‘El Festival de Los Rabanos (Festival of Radishes). People enjoy food and dance all around and wish each other Feliz Navidad.

Santa takes an entirely different form in Finland. He is known as Joulopukki, which stands for ‘Christmas Goat’. Here Christmas is referred to as ‘Joulu’, people wish each other ‘hyvää joulua’, and the traditions can seem to be weird to outsiders.

Even animals in Finland are given their own Christmas. It is a custom among Finnish farmers to hang the sheaf of wheat on trees for the birds. Many people will also hang bags of nuts and suet on branches.

People visit the graves of their family members around on the occasion. In fact, the custom is so widespread that the cemeteries and nearby areas can become crowded and the local administration finds it difficult to manage the traffic. Cemeteries turn into wonderland as glowing lanterns are left alight through the night and they create a dazzling effect against the snow.

The Swedes have added another dimension to how Christmas or ‘Jul’ is celebrated. Of all the things they like to spend their Christmas Eve afternoon watching Donald Duck. This has been the tradition in Sweden since 1959. The TV1 station will air the program called “Kalle Anka och Hans vanner onskar Gol Jul” exactly at 3 pm and still, half the population in the country watches it on Jul Eve.

Many Swedish families will make a goat out of straw and place it near the Christmas Tree to guard it. In Gavle, the locals will build a massive goat out of straw and it takes more than 2 days to build. The Swedish Santa is referred to as Jultomten. Along with Santa, even elves and gnomes (Tomte and Nissar) can bring presents. Just like the Norwegians, the Swedish also wish each other ‘god Jul’ on Christmas.

Romania is another country where there is a goat tradition associated with Crăciun, as Christmas is known here. The carol will have at least one person who is dressed as a goat, who is known as Capra. The goat will dance and jump around and engage in all kinds of mischief. Merry Christmas is wished as Crăciun fericit in Romanian.

Another Crăciun tradition is the Dubasi or the drumming band. On Christmas Eve dozens of bachelor men will go around through the streets, some even carrying violin and saxophone and the locals will give them presents.

In India, the traditional Christmas Tree can take any form. It is common to come across a mango tree or even a banana tree to be decorated as a Christmas Tree. In fact, mango leaves could be one of the decorative items all-around homes. Catholics in some Indian states hold fast through to Christmas Eve. The Indian version of Santa is referred to by different names – Father Christmas, Christmas Papa or Christmas Baba, and he arrives in horse and cart to deliver presents to kids. The locals wish each other ‘Krisamas kee badhaee’ in Hindi.

Russia always has a reputation for having a unique traditional and they don’t seem to miss the chance on Rozhdestvo (Christmas in Russian). In fact, the Russians celebrate Christmas an entire two weeks after December 25th – on January 7th. The Russians wish each other Merry Christmas by saying ‘S Rozhdestvom’.

Many people start fasting from Christmas Eve until they see the first star. They break their fast by drinking the famous ‘kutia’ porridge. Interestingly, the Rozhdestvo Eve dinner is mostly meatless. You could often be surprised to see some families enjoying ‘kutia’ from the same bowl.

There is another strange tradition to Russian Rozhdestvo, although it is increasingly fading away. Families will throw sochivo on the ceiling and if some of it gets stuck, it is believed to bring good luck.

How to Say “Merry Christmas” in other Languages

Liz is a writer and poet who lives in Minneapolis.

You’re on the Christmas Around the World page.