Celebrate with Quotes, Captions, and Jokes 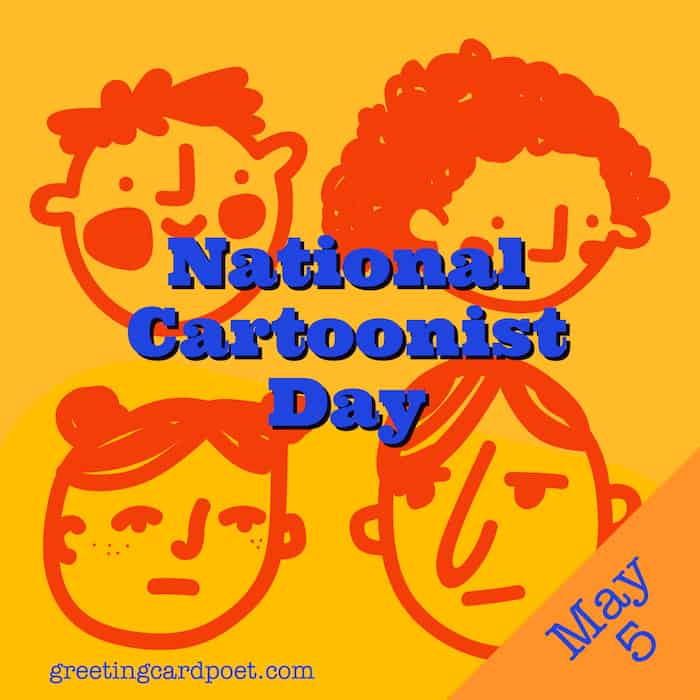 Cartoonists bring joy to our lives and fill them with laughter, which is precisely why National Cartoonists Day is a well-deserved one. Let’s dig into some interesting facts and some jokes that can be used to celebrate the day!

When Is National Cartoonists Day?

To know more about one of the most liked professions, read below.

Who is the most famous cartoonist?

One of the best and the most famous cartoonists globally is the Britisher Martin Rowson, and his cartoons frequently appear in The Guardian and the Daily Mirror.

How much do cartoonists make per year?

Do you need a degree to become a cartoonist?

To become a cartoonist, you will require a bachelor’s degree in drawing, illustration, painting, cartooning, fine art, animation, or other related subjects. In addition to that, you should have performed heavy coursework in illustration, drawing, anatomy, painting, computer graphics, or photography, etc.

What do cartoonists draw with?

While most cartoonists now use digital tools for drawing their cartoons, some still draw by hand and then scan them at the end.

How many hours do cartoonists work?

On average, cartoonists work 40 hours a week but often put in extra effort to meet the deadlines.

What is the difference between animation and cartoons?

Cartoons are two-dimensional and non-realistic, while animations refer to creating an illusion of motion, no matter the style.

The most famous cartoons ever created were Mickey Mouse and The Simpsons, with Looney Tunes coming in at number three, Road Runner at four, and Tom & Jerry lagging at the fifth position.

The first modern comic book was Famous Funnies and was released in the US in 1933.

Hugh Hefner was a failed artist and awarded the Ace Award by the National Cartoonist Society in 1963. This was “given to a celebrity or notable who at one time aspired to be a cartoonist but whose path led them to an entirely different career.”

The comic, now known as Peanuts, was initially called Li’lfolks.

In Up, the movie’s colors reflect the mood and attitude of Carl.

Sid from Toy Story grew up to become a sanitation worker and appeared again in Toy Story 3.

In Finding Dory, the bag with shrimp is the only clean one as he’s a skunk cleaner and eats the bacteria.

Check out the Best Animated Series of All Time.

Jokes To Celebrate Cartoonists and Cartoons

Asked my son what his favorite thing about Popeye was.
He said, “Forearms.”
I said, “No, he only has two.”

Do you know why Scooby-Doo is the most viewed cartoon in Denmark?
Because he’s a Great Dane.

What do you call a deer who wants to make cartoons?
Adobe Illustrator.

How many years after the debut of Mickey Mouse was it before Minnie Mouse made her first appearance?
Zero.

What does the rapper Lil Jon say when he visits Disneyland?
Turn down for Walt!

Why does Peter Pan fly all the time?
He Neverlands!

Where does Captain Hook go to get his hook replaced?
The second-hand store!

What kind of vehicles do Disney characters drive?
Minnie vans.

Why shouldn’t you give Elsa a balloon?
Because she’ll let it go!

What would you call someone called Dora who used to be a flower?
Dora the Exflora.

What did Spongebob say to Krabby Pat?
Pleased to eat you.

What kind of oil does Popeyes Chicken use?
Olive Oil.

How does the Man in the Moon cut his hair?
He eclipses it!

Why was the broom late for school?
It overswept!

I never studied art but taught myself to draw by imitating the New Yorker cartoonists of that day, instead of doing my homework.
Bil Keane

Let’s not let cartoonists get involved in a war of any kind, except for a war against stupidity.
Patrick Chappatte

Most success springs from an obstacle or failure. I became a cartoonist largely because I failed in my goal of becoming a successful executive.
Scott Adams

If you want to find out what a writer or a cartoonist really feels, look at his work. That’s enough.
Shel Silverstein

A cartoonist is extremely talkative in nature, but their words aren’t audible, much like the greatest artists of this world.
Unknown

My first ambition was to be an animator for Walt Disney. Then I wanted to be a magazine cartoonist.
John Updike

People still think of me as a cartoonist, but the only thing I lift a pen or pencil for these days is to sign a contract, a check, or an autograph.
Walt Disney

I stay out of politics because if I begin thinking too much about politics, I’ll probably drop writing children’s books and become a political cartoonist again.
Dr. Seuss

I’m a cartoonist; it’s what I am at heart, so cartoons take reality and deform it and make it grotesque, you make it funny, but you alter it.
Terry Gilliam

Without cartoonists and their creations, our childhood would have been so boring.
Unknown

I started on the fringes of journalism as a cartoonist on The Daily Mail.
Humphrey Lyttelton

If the world is about to end in 7 days, then a cartoonist would still be telling seven different stories for us to enjoy before the apocalypse.
Unknown